US Dollar News and Talking Points:

The recent rally in the greenback, to within a whisker of a fresh 16-month high, is on hold for now as traders look ahead to the latest US jobs report on Friday (non-farm payrolls) and next week’s US Mid-Term elections on November 6. Friday’s jobs data is expected to confirm that the US economy is still running hot and will add credence to the Fed’s tightening policy. No US rate hike is expected at next week’s FOMC meeting, but the market has priced in another 0.25% rate hike in December.

Next week will be dominated by Tuesday’s Mid-Term elections when US residents will elect members for both the House of Representatives and the Senate. Both are currently controlled by the Republican Party bu the Democrats believe that they may take control of the House of Representatives which would enable them to block some of US President Trump’s more contentious plans. A clean sweep by President Trump however may see another fiscal boost announced, boosting the US dollar’s allure further.

GBPUSD traded below 1.2700 on Tuesday but failed to touch the recent low at 1.26620, despite ratings agency S&P warning about the UK’s outlook if no Brexit deal is reached. The recent low looks like it will hold in the short-term, with the RSI bouncing of oversold territory, but renewed US dollar strength is expected over the next few weeks and the August 15 low is still very much in-play.

Today's bounce in GBPUSD will come as relief to retail investors who remain heavily net-long of GBPUSD. 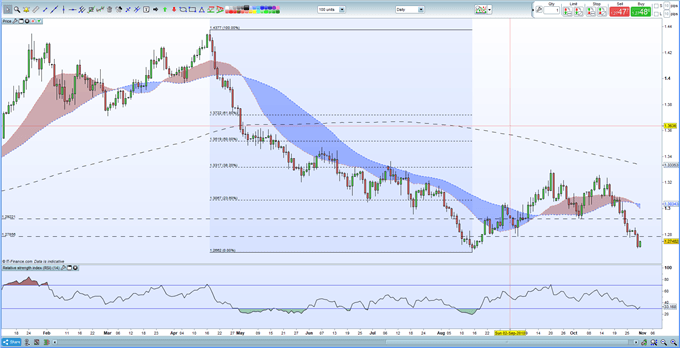