Asian stocks managed broad gains on the last day of what has been a miserable October, despite some rather shaky regional economic numbers, with a stronger US Dollar perhaps helping. That is after all a sight the area’s plentiful corporate exporters usually like to see.

Most indexes managed to rise, with Wall Street’s recovery from Monday’s losses tipped as another reason why. The Nikkei 225 was up 1.8% in Tokyo’s mid-afternoon. The Shanghai Composite added 1.1% and the Hang Seng 0.6%. Sydney’s ASX 200 provided the only patch of red. Having spent much of the day higher thanks to financial sector gains the Australian stock bellwether was 0.1% lower as its own close loomed.

The ASX has been under increasing bear pressure since the psychologically crucial 6000 handle was surrendered back in early October. 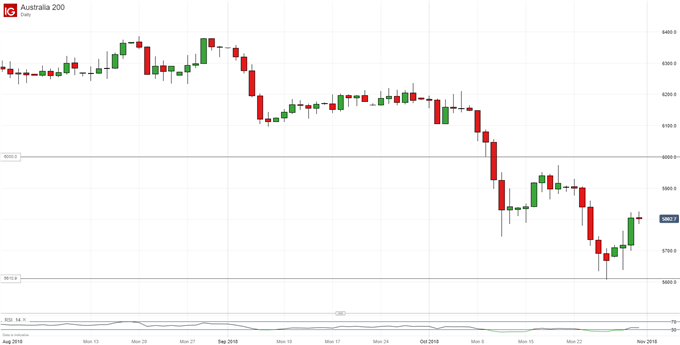 The index has made a new low for the year since then and, while it remains above that point right now, is showing signs of topping out again short of its previous significant high.

The US Dollar meanwhile remained bid across the board. It hit a new 16-month high against a basket of its major traded rivals. Strong US consumer confidence data on Tuesday contrasted with weaker Australian inflation and a lackluster showing from Chinese manufacturing. Both of these data points weighed on the Australian Dollar, while USD/JPY made gains after the Bank of Japan stood pat on monetary policy for yet another month, to the surprise of no one.

Gold prices hit two-week lows as the greenback headed north. Crude oil prices were initially hit again by worries about global demand levels but Brent prices inched back up as the Asian session went on.

There is plenty of economic data still to come Wednesday. The Eurozone’s Consumer Price Index, German retail sales and Canada’s official Gross Domestic Product release are all on tap. From the US will come crude oil inventory numbers from the Department of Energy, a labor market snapshot from Automatic Data Processing and mortgage application levels from the Mortgage Bankers’ Association