Equity markets closed firmly in the green Tuesday, marking only the fifth such occurrence for October in 2018. Tomorrow may be poised for a continuation of Tuesday’s strength following encouraging earnings from Facebook. The social media giant is one of the key NASDAQ members and a FANG member. As a darling of the tech world, Facebook is often looked to as a contributor for tech sentiment and broader equity sentiment to a degree. 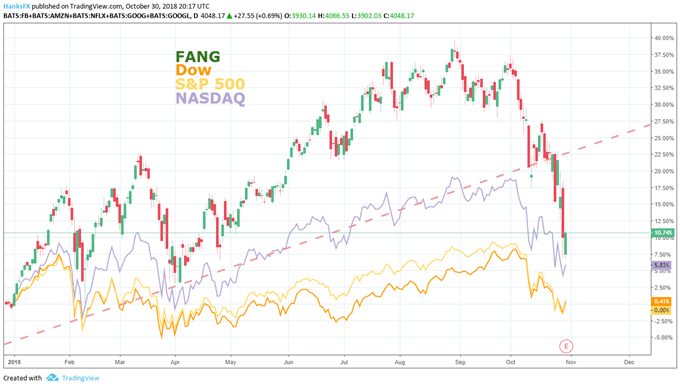 While it is unlikely Facebook alone could drive markets higher tomorrow, the report and subsequent market response are weighed with other recent earnings. Amazon and Alphabet reported earnings last week and disappointed investors. Coupled with Facebook, the mixed performances have thus far proved bearish for FANG and the NASDAQ. The slight bump experienced by Facebook could look to nullify some of the negative sentiment.

Leading up to the report, shares of Facebook were performing admirably and closed roughly 4% higher. The climb was miniscule compared to the descent Facebook has witnessed since July. After second quarter earnings were reported, shares plummeted 20% on advertising revenue growth concerns. Since then, weakness has continued along with the broader indices. 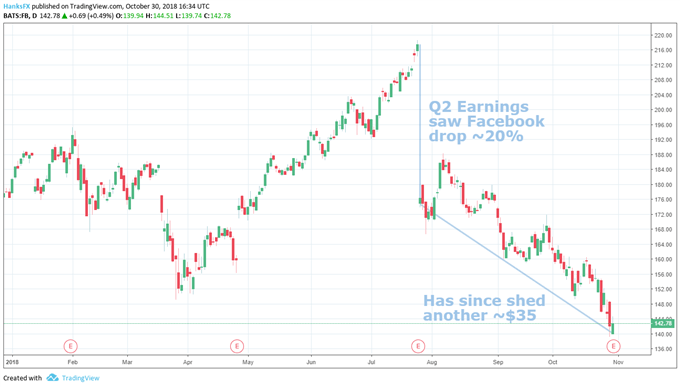 After briefly dipping 5%, Facebook recovered in after hours and traded roughly 2% higher as investors awaited the earnings call. Tech and equity speculators will now look to Apple’s third quarter report on Thursday to gauge FANG sentiment moving forward. A stellar performance from the largest publicly traded company in the US could make meaningful inroads into staging a broader equity rebound or some buoyancy at a minimum.