Asia Pacific stock markets put in a mixed performance to the start the week, with Chinese mainboards under pressure still even as indexes elsewhere rose.

October is looking set to be a month of heavy falls for equity around the world though as worries linked to both global trade and rising US interest rates take a toll, especially on emerging market assets. Wall Street is looking at its worst month since the end of the financial crisis, s state of play which will probably keep a lid on any regional enthusiasm. However, some buyers clearly thought that the Nikkei 225, ASX 200 and Kospi were at a level worth buying on Monday.

The Nikkei added 0.4% and the ASX just over 1%. However, Shanghai and Hong Kong were lower, by 1.5 and 0.1%, respectively, paring earlier gains in the case of the Hang Seng. News that HSBC bank’s profits had risen by 28% in the third quarter slightly missed expectations and probably won’t lift some of the question marks investors have over the giant lender. Its shares have fallen 20% or so this year.

Australia’s ASX 200 printed new 2018 lows last week and, while it is holding on above them for the moment, seems unlikely to re-climb its previous significant high anytime soon. 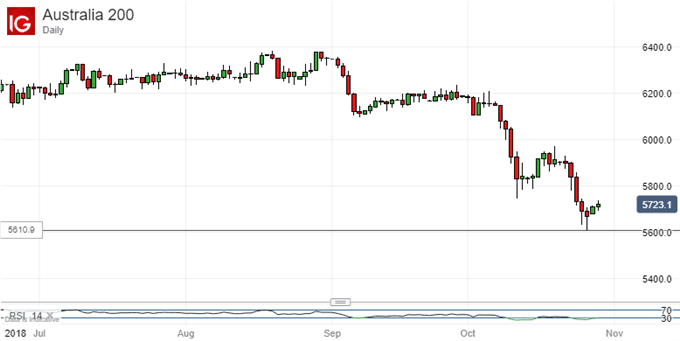 That comes in at 5961, barring the way back to the crucial 6000 level abandoned on October 10 after a five- month stay above the line

Investor focus remains on political developments around the world. The far-right’s Jair Bolsonaro becamse Brazil’s President-elect on Sunday in yet another vote seen as a slap for the establishment. Still, the country’s currency has made gains and a Tokyo-listed Brazilian stock fund made strong gains on news of his election, which was expected.

The markets are clearly prepared to give Bolsonaro the benefit of any doubts they may have, but the scale of fiscal and economic reform he faces seems daunting.

Turning from a new leader to one of the world’s longest-serving elected premiers, German Chancellor Angela Merkel’s junior coalition partners have given her Christian Democrats until next year to deliver better policy results, with their alliance threatened if they don’t. Both parties suffered in Sunday’s regional votes.

The US Dollar was generally well bid with risk appetite fragile although the likes of the Australian and New Zealand Dollar made small gains as the Asian session went on. Emerging market units remain very jumpy.

Gold prices inched lower as more local stock markets went green while oil prices also edged back up, even if worries about likely levels of global demand continue to weigh.

Still to come on the data slate are details of US consumption spending for September, and UK mortgage-approval and consumer credit numbers.