US Dollar Hovers Near Monthly, Yearly High after Q3’18 US GDP Beats

- The US economy grew at a +3.5% annualized rate in Q3’18, keeping 2018 on pace to be the best year of growth since before the Global Financial Crisis.

- Personal consumption remain very strong, but the trade balance is weighing on growth once again.

- The DXY Index maintained its daily gains on the data, holding just below its weekly, monthly, and yearly highs after the release.

In the third quarter, the US economy continued its strong pace of growth, even if gains slowed from the previous quarter, coming in at +3.5% annualized from +4.2%. Overall, the report slightly beatexpectations, which were at +3.3% before the release. Overall, the mix of the components of the GDP release suggest that US domestic activity is healthy, while rising trade tensions are clearly weighing on headline growth.

Personal consumption, the largest component of GDP (thanks to the US consumer accounting for nearly 70% of GDP), improved to +4.0% from +3.8%. This was the strongest rate of consumption since 2014.

But certain aspects of the report were not as promising. Housing investment was down by -4% in Q3’18, more evidence that rising interest rates – as well as changes in tax policy due to the Trump tax plan – are having an increasingly negative impact on the housing market (declining affordability). This was the third consecutive quarter of declines in housing investment.

Additionally, after a one-off performance in Q2’18, trade has started to prove to be a on the US economy in the second half of the year. The net-impact of trade on Q3’18 growth was the most negative in 33 years, a clear sign that the US-China trade war and tariffs levied among multiple other countries is beginning to have causalities.

Here’s the data keeping the US Dollar near its weekly, monthly, and yearly highs:

Following the GDP release this morning, Fed funds futures were pricing in 70% chance of a 25-bps rate hike in December (the fourth of 2018). Coming into this week, odds for a hike in December was 81%. 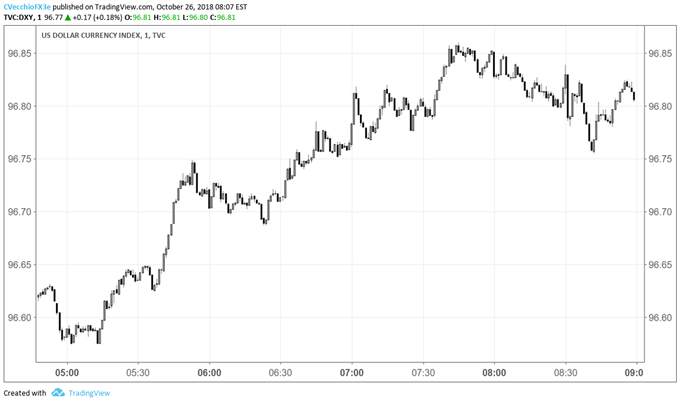 The US Dollar (via the DXY Index) barely changed following the GDP release this morning. The DXY Index traded from 96.82 ahead of the report to as high as 96.84 and as low as 96.76 thereafter. At the time this report was written, the DXY Index was trading at 96.81. Still, the DXY Index remained in positive territory for the week, having added +1.16% since last Friday’s close; it remains only -0.2% below its October and 2018 high.