S&P 500 to Look Elsewhere for Support After Disappointing Earnings

After US equities staged a rather significant rebound Thursday, three of the country’s largest technology companies reported third quarter earnings after the close. FANG members Amazon and Alphabet (Google’s parent company) were accompanied by Intel and many investors were hopeful they could provide the spark needed for markets to rebound further.

Tech stocks and the broader NASDAQ index have been a pillar of the recent growth realized by US equities but have fallen significantly in October's rout along with the broader markets. Still, FANG remains healthily in the green. Conversely, Wednesday’s decline saw the broader indexes effectively surrender their gains for the year-to-date.

Tech Stocks Have Lost Their Luster 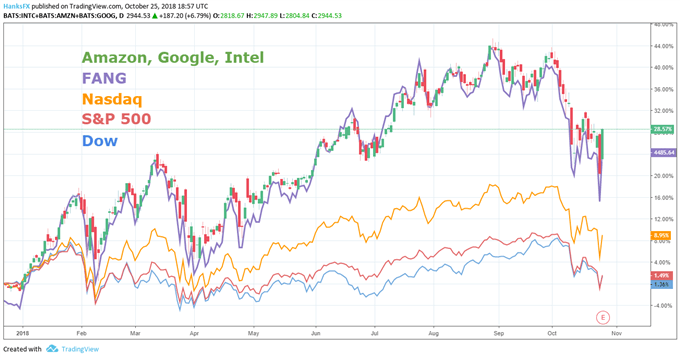 Amazon boasts the largest market capitalization of the three companies reporting this Thursday and the second largest in the US overall. Unfortunately for Amazon, a high valuation comes with high expectations. Following a slight miss of those expectations, Amazon faltered after-hours.

The online retailer narrowly missed revenue expectations, reading $56.6 billion versus $57 billion. Earnings per share (EPS) beat the expected $3.11 with a hefty $5.75. Amazon shares traded 4% lower in after-hours trading. Although the third quarter data was nearly on target, forecasts for the fourth quarter seem to have been the deciding factor in the market’s response.

Amazon reported fourth quarter forecasts for sales in the range of $66.5 billion to $72.5 billion. Even the top end of the range is a rather significant miss compared to analyst expectations of $73.8 billion. The tempered growth forecast is likely attributable to rising prices from trade wars coupled with increased competition. Further, explosive growth has been a hallmark of Amazon and is rightfully woven into the share price. Signs that this growth may be slowing could result in a harsh reassessment of Amazon’s valuation.

The second company to report was Google’s parent company, Alphabet. Alphabet also narrowly missed on revenue and delivered a beat on EPS. Third quarter revenue came in at $33.74 billion versus the expected $34 billion. Earnings per share read $13.06 versus $10.45 expected. Given the large profit surprise on relatively light revenue, Alphabet shares fared much better in after-hours trading. At the time of this article, Alphabet traded 2% lower.

The only company to deliver a beat across the board was Intel. Versus a forecasted EPS of $1.15, actual earnings read in at $1.40. Revenue came in at $19.2 billion, also beating out the forecasted $18.13 billion. Following the report, Intel shares enjoyed a 3.25% bump in after-hours trading. Coupled with Thursday’s climb, the shares are up 7.5% from Wednesday’s close.

In the current equity climate, the disappointing performances from the mega-caps of Amazon and Google may deliver another tumultuous trading session on Friday. Amazon’s sales forecast in particular will weigh on investor sentiment and likely add to concerns of future growth for US corporations on a broader scale.