As anticipated, Asia Pacific benchmark stock indexes plunged, echoing the aggressive selloff on Wall Street where the S&P 500 nearly wiped out all of the progress it made this year thus far. The Nikkei 225 gapped considerably lower and was down as much as 3 percent on Thursday as it headed for its lowest close since April. In the absence of major economic event risk, markets are focusing on the broader fundamentals.

China’s Shanghai Composite was down about 1.42% heading into Thursday’s close as it continued paring gains from last week’s disappointing third quarter GDP data. Australia’s ASX 200 dropped about 2.22 percent, weighed down by all of its sectors as it headed for its lowest close of this year at this moment in time. South Korea’s benchmark KOSPI index was down more than two percent.

Looking at FX markets, the anti-risk Japanese Yen was cautiously higher against some of its major counterparts. Notable outperformers were the Australian and Canadian Dollars. This may have been due to weakness in the US Dollar, which coincided with a drop in the Nikkei 225. The greenback does boast the highest yield of the majors and this may have worked against it as sentiment deteriorated for now.

Over the remainder of the day, we do have the ECB monetary policy announcement, there may be chance that the Euro and equities brush off this event risk as policy is already on a preset course with few projections expected come. As such, risk trends may continue being the dominant driver for markets. S&P 500 futures are pointing cautiously higher, suggesting that a pause in the global stock selloff could ensue.

Another looming threat for sentiment-linked currencies such as AUD and NZD is the upcoming second round of Brazilian elections. Analyst Dimitri Zabelin will be covering a preview of this event and the risk for emerging markets later today at 22:00 GMT.

On a daily chart, the ASX 200 blew through key support levels at 5,795 and 5,724 this session. The index is on a 5-day losing streak, the longest since early September. This exposed a range of support composing of the lows achieved back in June through October 2017. Near-term resistance appears to be the 38.2% Fibonacci extension which also closely aligns with the April 2018 low. 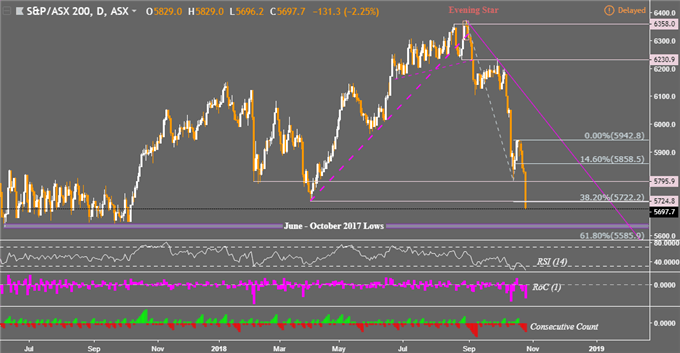