- The Bank of Canada hiked its overnight rate by 25-bps to 1.75% today as expected, its highest level since the 2008 Global Financial Crisis.

- If the BOC is intent on bringing its overnight rate back to the ‘neutral rate’ quickly, then the term “gradual” was dropped because policymakers intend on accelerating the rate hike cycle.

- USD/CAD’s decline spurred on not only by the BOC rate decision, but another round of woeful US housing data.

The Canadian Dollar is having its best day since September 28 (when it became clear Canada would join the United States and Mexico in the USMCA) after the Bank of Canada not only raised rates by 25-bps – a move that was widely expected, with overnight index swaps pricing in a 92% chance ahead of the meeting today – but offered its clearest signal yet that it was considering embarking on a more aggressive rate hike cycle as the calendar flips to 2019.

Removing the word “gradual” from the policy statement when describing the pace of rate hikes is significant. In hindsight, it now appears that the word “gradual” was inserted earlier this year as a measure to prevent traders from speculating too aggressively on the hike cycle in the face of the uncertainty that the NAFTA negotiations wrought. But now that the new USMCA is in place (the replacement for NAFTA), said uncertainty is gone, and thus BOC policymakers now feel that it’s time to kick the rate hike cycle back into gear. In aggregate, this leaves the BOC in the position of being data-driven once again.

Whether or not this means the next 25-bps hike is coming sooner than previously anticipated is another story. Prior to today’s policy decision, there was a 58% chance of hike in January 2019; after, that has risen to 72%. Yet the December 2018 pricing is barely moved, from 16% yesterday to 23% today.

But even the September jobs report was hollow: of the +63.3K net-gains, -16.9K were full-time and +80.2K were part-time. Canadian inflation figures came in much weaker than anticipated in September as well, registering +2.2% versus +2.7% expected (y/y) on the headline. Overall, the Citi Economic Surprise Index for Canada is -16.3, down from +61.1 at the start of October. 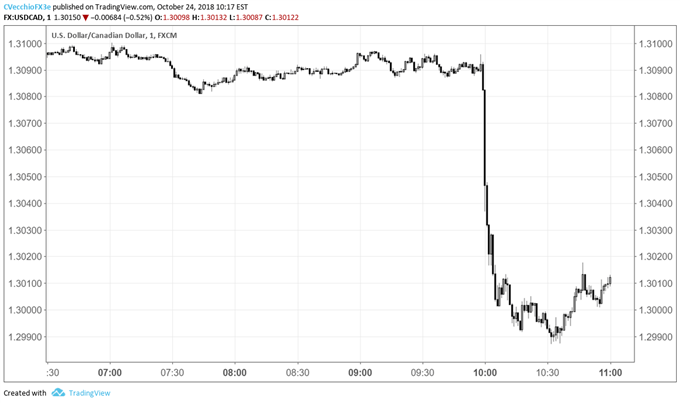 Following the rate decision, the Canadian Dollar gained across the board en route to its best performance in over three weeks. USD/CAD dropped from 1.3091 to as low as 1.2988 thereafter, before recovering back to 1.3012 at the time this report was written.