Asia Pacific equity markets endured a turbulent Wednesday, much as their Wall Street counterparts did in the session before. However, unlike their US counterparts, most indexes look set to end the session with gains.

US stocks had been in the green early but fell into the close after Caterpillar reported that higher steel prices and tariffs had increased its costs- raising the never-dormant specter of trade war which has dogged the markets all year.

Crude oil prices hovered near two-month lows as worries about demand in a world where growth seems set to slow met with Saudi pledges to fill any holes in supply left by sanctions against major producer Iran. DailyFX Junior Analyst Daniel Dubrovsky writes that a key uptrend reversal may now be in train.

Sentiment was probably not helped by US President Donald Trump again attacking the Federal Reserve’s monetary policy. In an Wall Street Journal Interview Trump mentioned Fed Chair Jerome Powell by name in a complaint about the rising interest rates he has to contend with, contrasting with the record low settings which accompanied much of the Obama Presidency.

Still, Chinese stock markets managed broad gains with Shanghai up by 1.5% and the Hang Seng in the green by 0.9%. The Nikkei added 0.5% while the ASX 200 was the major loser, slipping into the red as financials underperformed. The Sydney benchmark has fallen far below the key 6000 mark this month and is back to support at early October’s lows. This has held so far on a daily basis but looks to be under severe threat with further slips likely if it gives. 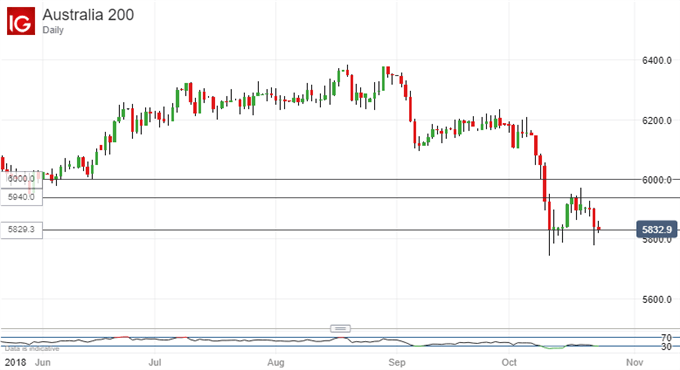 On the foreign exchange front haven currencies like the Japanese Yen and Swiss Franc did well in early trade as equity markets slipped but they lost ground again as stock investors edged back in.

Still to come on Wednesday are various Purchasing Managers Indexes from around Europe, Mexico’s Consumer Price Index and October’s monetary policy decision from the Bank of Canada which is expected to be an quarter-point interest rate rise. From the US investors await news of crude oil inventory data and new home sales levels.