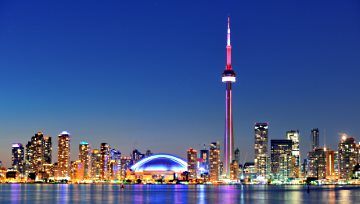 On Friday, most Asia Pacific benchmark stock indexes gapped lower following declines in the S&P 500 from Wall Street trade. This may have been due to Fed rate hike bets being reignited in the aftermath of hawkish FOMC meeting minutesfrom Wednesday. The Nikkei 225 declined about 1.34% at market open, but it spent the rest of the session climbing.

Heading into Friday’s close, the Japanese financial index was down about 1.22 percent. In fact, the majority of local stock indexes behaved similarly. China’s Shanghai Composite gapped lower, but pared most of its losses at it traded little changed towards market close. Both the ASX 200 and the KOSPI saw a similar fate, ending the day only about 0.18% and 0.16% lower respectively.

Looking at FX, this may have been why the anti-risk Japanese Yen traded lower. JPY rose as local equities attempted to fill gaps. And as expected, it largely brush off softer-than-expected Japanese headline CPI data. Meanwhile, China’s GDP slowed to its softest pace since 2009 in the third quarter of 2018. This follows the general trend of weakness in global growth that could be the catalyst for the next stock market selloff.

For now, S&P 500 futures are pointing a bit higher, hinting we may see European and US equities trade to the upside into the end of this week. However, hawkish commentary from Dallas Fed President Robert Kaplan could revive weakness in the Dow Jones. Meanwhile Canada CPI data could outperform, bolstering the Canadian Dollar while perhaps weakening the TSX ahead of next week’s BoC rate announcement.

On a daily chart, the ASX 200 has been struggling to make further progress to the downside, but highs achieved earlier this week were not surpassed either. Near-term resistance still stands as the 61.8% Fibonacci retracement at 5,972. But a reversal of the dominant downtrend since August requires a push above a descending resistance line from then. Immediate support is the 78.6% level around 5,863. 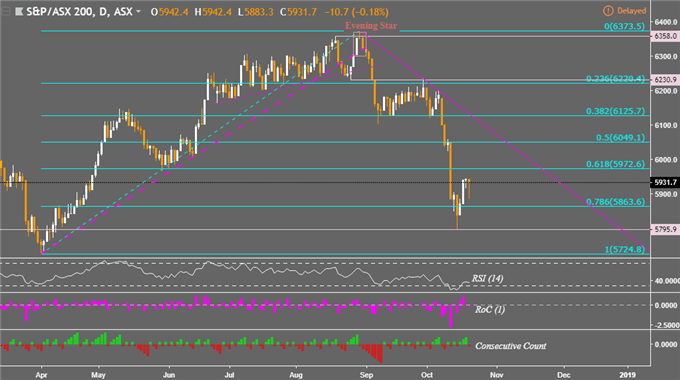