This was also despite the US Treasury refraining from labeling China as a currency manipulator. It did however raise concerns about the nation’s exchange rate policy and noted that it will be closely watching it. At one point during Thursday, the Yuan depreciated to its weakest level since January 2017. There could yet be more declines in store for Chinese shares if local economic growth slows down tomorrow.

Japan’s Nikkei 225 declined roughly 0.6 percent heading into Thursday’s close, led lower by industrials and consumer discretionary sectors. South Korea’s KOSPI dropped around 0.7 percent while Australia’s ASX 200 was rather little changed. The latter did gap higher before proceeding to trade lower alongside other equities. S&P 500 futures are pointing lower, hinting that the deterioration in market mood may continue.

Looking at FX, the Australian Dollar outperformed against its major counterparts as local bond yields rose. RBA rate hike bets were somewhat bolstered as Australia’s unemployment rate dropped to its lowest since 2012. Meanwhile the Canadian Dollar traded lower, accompanied by a slide in crude oil prices which are at times sensitive to risk appetite.

Over the remainder of the day, keep an eye out for the final day of the EU leaders’ summit in which we will get an update on how Brexit talks have been progressing. Over the weekend, optimism fell apart as UK Prime Minister Theresa May rejected an exit deal. More of the same could bode ill for the British Pound which may boost the FTSE 100. Hawkish commentary from St. Louis Fed President James Bullard could also risk sending stocks lower.

The drop in the Nikkei 225 occurred after prices were unable to breach above horizontal resistance around 23,050 in what appears to have been a temporary correction. Should market mood continue deteriorating, we may the Nikkei 225 decline to test a range of support between 22,160 and 22,250. A descent through that opens the door to resume its decline since the beginning of October. 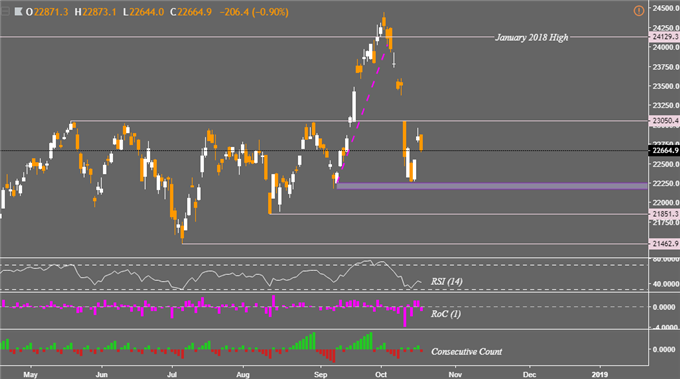