The New Zealand Dollar traded significantly higher Monday evening as New Zealand CPI was released to surpass expectations. Year-over-year CPI came in at 1.9%, a 0.4% increase from last quarter. Quarter-over-quarter CPI was 0.9% versus 0.7% forecasted and 0.4% in the second quarter. This marks the fastest growth in YoY and QoQ for the inflation measures since the third and first quarter of 2017 respectively. The uptick will likely influence Governor Adrian Orr’s RBNZ when they meet to discuss the official cash rate on November 7th. 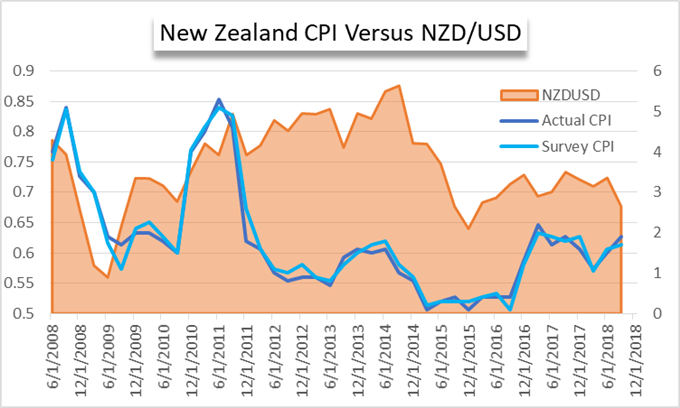 Currently, New Zealand’s official cash rate is at a record low 1.75%. The last change was a 25 basis point decrease in November 2016. The record low interest rate has done little to strengthen the NZD and thus any change perceived as hawkish in New Zealand’s monetary policy should boost the currency versus its counterparts.

Looking to the NZD/USD pair specifically, the CPI data was hotly anticipated. High expectations sent the NZD up to 0.6544 versus the greenback just before release.

Following the release, speculators jumped on the opportunity to buy into a currency they saw as undervalued now that future rate hikes may come sooner than previously expected. Consequently, the kiwi traded to 0.6568 versus the USD at the time of this article. The buying and revised fundamental backdrop could also break the 6-month downtrend the kiwi finds itself in.

Compared to its Australian counterpart, the Kiwi rocketed higher. AUD/NZD traded notably lower following the CPI release as the RBNZ looks to leapfrog the Reserve Bank of Australia in terms of hawkish policy. The AUD/NZD pair dipped to 1.0829 at the time of this article, the lowest since late June.

Consult our Economic Calendar for other important events and data releases due this week.