GBPUSD May Continue to Drift Lower Ahead of EU Summit

Weekend Brexit talks that were hoped to push negotiations between the EU and UK forward, stalled yet again as both sides failed to agree on how to solve the Irish border issue. And with the clock ticking, Sterling remains under downside pressure as odds of a no-deal Brexit tick higher. Ireland’s UK ambassador Adrian O’Neill said the latest setback could increase a no-deal Brexit scenario and that preparations for all eventualities “are ramping up quite considerably”.

According to reports, the EU are seeking additional reassurances over the Irish border – a second backstop – to prevent a hard border in Ireland. UK PM Theresa May, already under significant pressure from within her own party, wants to keep the whole of the UK in the single market until a permanent solution is found but the EU want a second backstop that would keep Northern Ireland in the EU. Senior Conservative figures continue to push forward a different agenda with former foreign secretary Boris Johnson saying the backstop should be thrown out, while former Brexit secretary David Davis has called for parliament to “exert its collective authority” over the border issue.

Against this fragile background, Sterling will remain under downside pressure as we head towards the EU Summit meeting on Wednesday/Thursday this week. The recent goodwill priced in the British Pound has started to fade leaving GBP vulnerable to further losses. A look at the four-hour chart sees GBPUSD just trading above the 50-day moving average, providing a modicum of short-term support, but further falls to current support between the 200-day ma at 1.30606 and the last Tuesday’s double low around 1.3030 cannot be discounted.

Brexit Analysis: How GBP and Stocks Might React to Alternative Outcomes. 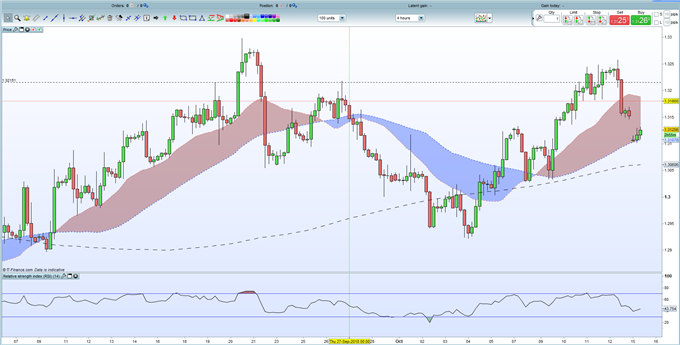