US Dollar Snaps Intraday Losses after September US CPI Release

- Headline September US CPI comes in at +2.3% y/y, while the core CPI reading was likewise below expectations at +2.2% y/y.

- The lowest inflation readings since February may help deflate the narrative around higher rates, which has been feeding into lower stock prices.

- The US Dollar initially dropped on the weaker than expected inflation figures, but soon stabilized as both US bonds and stocks were bid.

Amid a sharp selloff in both bonds and stocks that has market participants practically screaming “Sell USA!” the US Dollar has found little reprieve. Absent meaningful economic data this week up until today, there has been no catalyst to spark a turnaround in the greenback’s fortunes. However, today’s inflation data may help calm some aspects that contributed to yesterday’s acute selling conditions.

Headline September US CPI missed expectations slightly, coming in at +2.3% versus +2.4% expected (y/y), according to a Bloomberg News survey. With average hourly earnings in at +2.8% y/y, real wage growth is once again trending positive in the United States for the second consecutive month. Similarly, core inflation came in at +2.2% y/y versus +2.3% y/y expected; collectively, these are the lowest inflation readings since February.

The data comes against the backdrop where US Treasury yields have been rising amid signs that the Federal Reserve will hike rates beyong what the market had priced in after the September FOMC meeting. Fed Chair Jerome Powell has said recently that the economy’s ‘neutral rate’ (the breakeven short-term rate that theoretically keeps an economy from overheating or underperforming – the Goldilocks level, if you will) may be higher than previously anticipated, helping spark the run higher in long-end US Treasury yields.

But with signs that inflation pressures are cooling rather than heating up, today’s data should help diffuse some of the concern that Fed Chair Powell’s mindset is to continue hiking rates come hell or high water. While a December rate hike still looks like a lock (76%), the first month with greater than 60% pricing thereafter is June 2019 (72%). 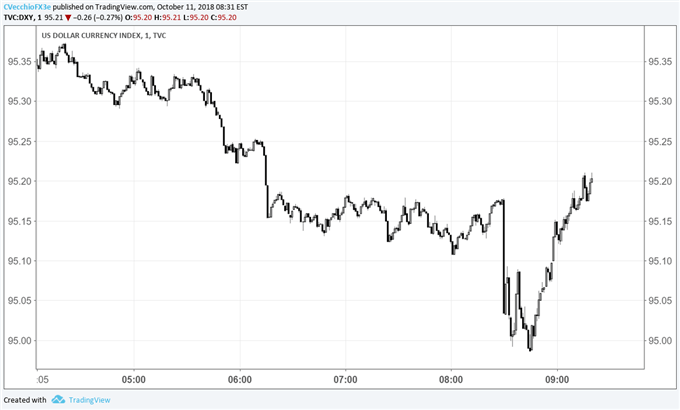