Nearly $15 billion was wiped off the cryptocurrency market capitalization – now $201 billion - in a matter of a few hours as major coins registered double-digit losses and broke through technical support levels with ease. We warned yesterday at our Weekly Cryptocurrency Webinar that recent narrow trading ranges were a breeding ground for a sharp breakout, either way.

Another negative sign for the market as a whole was that Wednesday’s breakdown was made on releatively light volume - around $15 billion – and little buying appeared at these lower levels. For example the four-hour Bitcoin Cash (BCH) chart below shows the coin dropping around 12% without any buying interestb appearing. Noted support for BCH comes at $407, just over 10% lower than its current levels. If this breaks then $250 - $300 is on the cards.

DailyFX analyst Paul Robinson recently wrote last week that bitcoin “still has significant downside risk” and that it could decline another 85%.

We noticed recently that Ripple (XRP) had become constrained in a short-term downtrend, started from the September 30 high print at $0.62 and that a horizontal support at $0.427 was important if the market was to push higher. The latest breakdown has taken out this support level and XRP now trades under all three moving averages on the daily chart – a negative market set-up. The next level of support for Ripple is at $0.25. 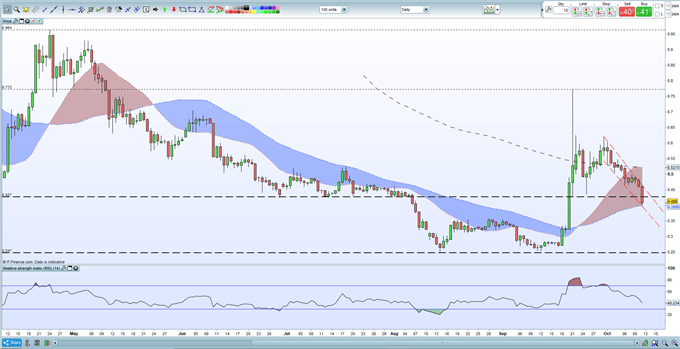 IG Retail Sentiment shows that traders are 95.1% net-long of Ripple.

What’s your opinion on Bitcoin and the recent market crash? Share your thoughts and ideas with us using the comments section at the end of the article or you can contact me on Twitter @nickcawley1 or via email at nicholas.cawley@ig.com.