Generally speaking, Asia Pacific stock markets traded somewhat mixed on Tuesday. After experiencing its worst performance in more than 3 months, the Shanghai Composite corrected about 0.50% higher on its second day back from a holiday. The mood outside of the world’s second largest economy fared worse however.

The Nikkei 225 gapped lower for a second day as it fell about 1.21%, heading for its longest losing streak in a month (4-days). Australia’s ASX 200 fared hardly better, declining over one percent. Tensions between the US and China still remain elevated, as was noted yesterday by Secretary of State Michael Pompeo. Treasury Secretary Steven Mnuchin was also pressured not to label China a currency manipulator.

Interestingly, stocks and FX brushed off the International Monetary Fund cutting its global growth forecast, placing the focus on how developing nation markets will handle the news later. Should the MSCI Emerging Markets ETF accelerate its pronounced selloff since essentially earlier this year, we may see sentiment deteriorate which could pressure the anti-risk Australian and New Zealand Dollars lower.

The US Dollar corrected cautiously lower despite a surge in local 10-year government bond yields, which resumed trading following the Christopher Columbus holiday. USD/HKD on the other hand rose over 0.7% as the 10-year yield rallied. USD/JPY headed for another day lower, accelerating a decline that could eventually lead prices towards a rising support line from March 2016.

After setting new 2018 lows, the Australian Dollar is making corrective gains against its US counterpart and prices are poised to close above September low of 0.70852. Should emerging markets falter later today as outlined above, we may see AUD/USD resume its long-term descent as it eyes 2016 lows. Should the pair hold on to its upside progress, near-term resistance would be exposed around 0.71452. 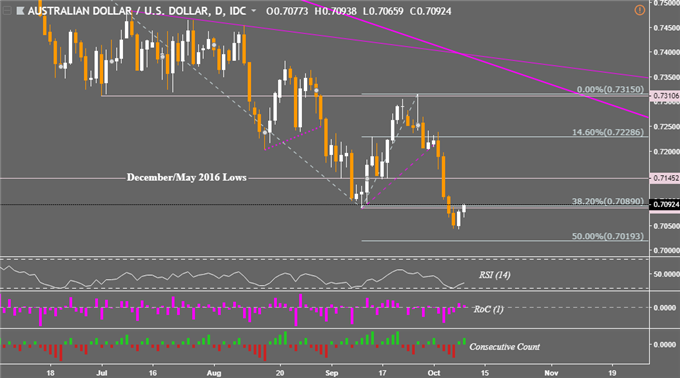