Asian markets were weaker on Monday as Chinese investors returned fully to the fray after the week-long Golden Week holiday. The People’s Bank of China cut the reserve ratio requirement for banks, a stimulus measure which was not unexpected, indeed it’s the fourth such cut this year. However, it did seem to raise investor concerns about the likely impact of current trade tensions with the US, from which there seems to be no prospect of early release.

The Shanghai Composite was down nearly 3%, with fall of nearer 1% seen across Japan, Australia and Hong Kong. Seoul’s Kospi was down 0.4% as its own close loomed. The day’s economic data came from China where the private service sector outperformed more sluggish manufacturing in September.

Foreign exchange markets were a lot steadier than their equity counterparts through the Asian session, with USD/JPY a little higher and AUD/USD also inching up. Against the Japanese Yen the US Dollar remain firmly within the daily chart uptrend channel which had held sway since March. 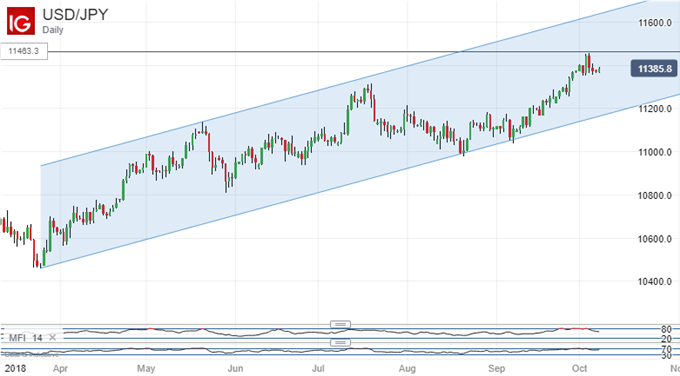 However the Dollar has yet to top its most recent significant peak which was made on October 3 in the 114.60 area and that seems to be providing near-term resistance for now, significantly short of that channel’s top.

Gold prices initially rose on the news of China’s reserve increase- as the US Dollar rose against the Yuan in the aftermath. However, they steadied as the session went on. Crude oil prices were lower as the market mulled possible waivers in US sanctions against Iran.

Monday is a quiet day for economic data across Europe and North America with only Germany’s industrial production figures likely to draw much of a crowd.