For much of 2018 the Australian Dollar has largely been held captive from its Chinese proxy status, which has seen the currency drop 9% against the greenback. Eyes will be on the 2018 low (0.7066) as US Vice President Pence addresses the issues surrounding China, which could potentially escalate the current tensions between the US and China. With no trade deal in sight, headline risk continues to remain elevated, leaving the Australian Dollar vulnerable to further losses.

US Yields Moving in Favour of USD Buying vs. AUD Selling

Yesterday saw US bond yields in the 10yr hitting the highest level since the financial crisis after reaching 3.12%. This had largely been sparked by the slew of firm US data releases suggesting that the strong growth momentum remains on track, while Fed Chair Powell had also noted that the central bank could raise interest rates above the neutral level. Consequently, rate differentials continue to favour AUDUSD selling, consequently increasing the scope for a move towards the January 2016 low at 0.6827. 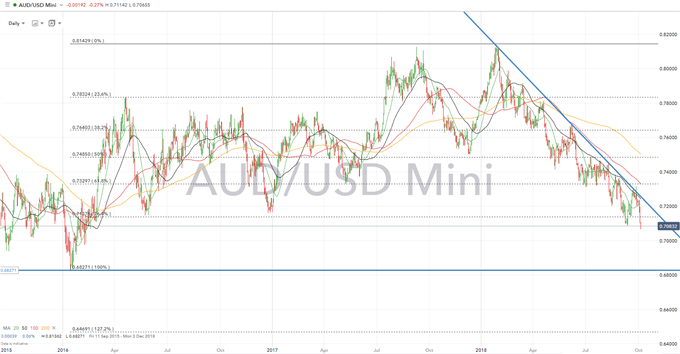 The bearish trend in AUD shows no signs of abating with the currency continuing to reject the descending trendline stemming from the 2018 high, while a series of low highs reaffirms this view. A close below the 76.4% retracement at 0.7137 increases the scope for a move towards 0.70 before the January 2016 low situated at 0.6827.