AUD Spikes On Trade Balance, Italy and EM May Cause Reversal

The Australian Dollar weakened against its US counterpart as local economic data crossed the wires during Thursday’s Asia Pacific trading session. Exports in August increased, causing last month’s trade balance to clock in at A$1604m, exceeding both economists’ forecasts of A$1450m and July’s A$1551m. The increase in Australian exports may be attributed to the weakening of the local currency, intensified by the Reserve Bank of Australia’s decision to maintain its record low 1.50% OCR. 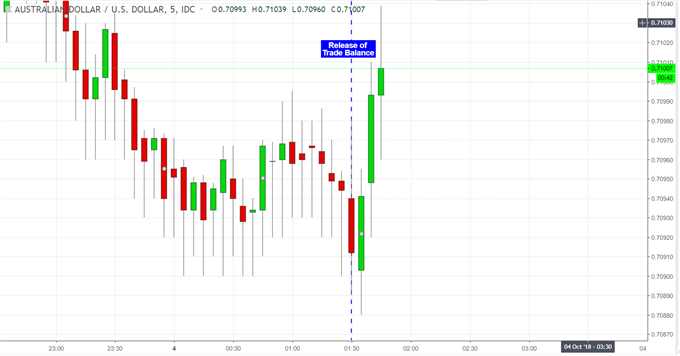 However, the slight uptick in AUD/USD prices is unlikely to continue, as their dominant downtrend remains intact. Interest rate differentials, weakening Australian economic activity, and the US Dollar’s haven status have caused the Aussie Dollar to suffer against the greenback for the majority of this year. Despite an inverse Head and Shoulders bullish reversal, the currency pair recently broke through key December 2016 support levels near the 0.716-0.719 range. Currently, Aussie Dollar is eyeing the 2018-low of 0.7085, reached last month on September 11. Traders might look for invalidation of the descending trend channel and a bounce above the 2018-low before considering a potential bullish approach. 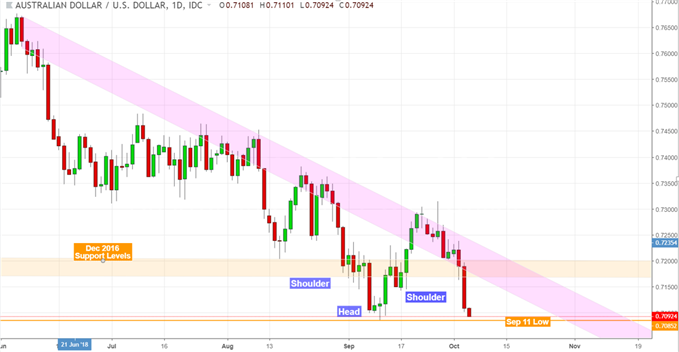 Looking ahead, the Australian Dollar may carve new lows for this year as the pro-risk unit will closely eye market mood. Recently, risk aversion took center stage due to Italian budget issues with the European Union that caused declines in major European stock indexes. Emerging markets’ weaknesses may also amount to losses in the Aussie Dollar in the long run. As for economic data, AUD/USD could potentially be impacted by the release of September’s change in non-farm payrolls and unemployment rate.