As anticipated, the rally in US government bond yields, which reflected rising Fed rate hike expectations, boded ill for most Asia Pacific equities heading into Thursday’s close. The Nikkei 225 contracted about 0.70% and South Korea’s KOSPI declined over 1.55%. One notable standout though was Australia’s benchmark stock index.

The ASX 200 rallied about 0.50 percent, led higher by financials and materials. As for the former, prospects of higher interest rates from the US (which can have a far reaching impact on a global basis) probably sent that sector higher. Meanwhile a surge in aluminum prices likely aided the latter amidst supply disruption fears. This followed Norsk Hydra, a major Brazilian alumina refinery, shutting down.

Given that the majority of APAC shares traded lower, the anti-risk Japanese Yen and Swiss Franc appreciated across the board. Meanwhile the pro-risk Australian and New Zealand Dollars fell. The former brushed off a wider-than-expected trade balance surplus which can have relatively positive implications for GDP. But given the patient RBA, it likely offered limited implications for policy bets.

With S&P 500 futures pointing lower heading into the European and US trading session, we may see this trading dynamic continue. As such, AUD/USD could close at its lowest point this year so far which may offer an opportunity for a modified setup to our short. Sentiment-linked currencies seem particularly vulnerable to stray Italian budget and Brazilian political headlines.

USD/JPY prices brushed off a bearish engulfing candlestick pattern, which would have been the first step in beginning a potential reversal to the downside. The Japanese Yen has now depreciated against the US Dollar to beyond the lows achieved in May/July/November 2017. We anticipated in our Yen quarterly forecast that a push above that area of resistance opens the door to further USD/JPY gains. The next target appears to be 115.09 while a near-term ascending line stands as support. 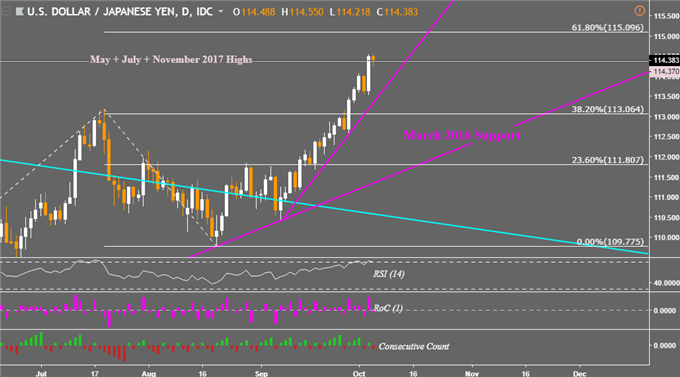