The Euro awakened during Wednesday’s Asia Pacific trading session via a welcoming update on Italy’s budget report. Reports crossed the wires that the country is preparing a plan that proposes reducing the deficit to 2% of GDP in 2021. EUR/USD climbed over 0.2% on the announcement which sets up the Euro to end its longest consecutive losing streak on a daily basis in almost two months (5 days).

This offered a temporary relief to some APAC benchmark stock indexes such as the Nikkei 225 which rose on the update. But that failed to meaningfully reverse the somewhat pessimistic mood in the markets. Heading into the latest Italian budget update, the Nikkei 225 was already declining which was taking the pro-risk Australian and New Zealand Dollars lower with it.

As Wednesday’s trading session began, the Hong Kong Dollar depreciated about 0.07% against its US counterpart bringing USD/HKD closer to the upper limit of the HKMA’s peg. In fact, the pair has been heading to that area for over a week at this point amidst broad gains in the US Dollar. This may have rekindled concerns about the HKMA defending its currency which has stoked risk aversion in the past.

Not to mention Asian shares might have also been echoing the relatively lackluster performance on Wall Street where the NASDAQ Composite declined about 0.47%. Adding to this is that Chinese and South Korean stock markets were closed for holidays, reducing liquidity to a certain extent which can often exacerbate FX volatility.

Meanwhile the Indian Rupee depreciated around 0.6% as USD/INR rose to a record 73.41. India, and other emerging markets, have been under pressure lately amidst tightening global credit conditions. The recent increase in crude oil prices to their highest since 2014 also does not help in curbing their current account deficit. Developing nations may continue being under pressure which bodes ill for sentiment and currencies such as AUD and NZD.

The New Zealand Dollar approaches its next obstacle in its efforts to resume the dominant downtrend from June. NZD/USD prices face the February 2016 lows between 0.65454 and 0.65633. A descent through support will open the door to test the September low at 0.65011. Meanwhile a key resistance barrier now seems to be a range between 0.66992 and 0.67213 on the chart below. 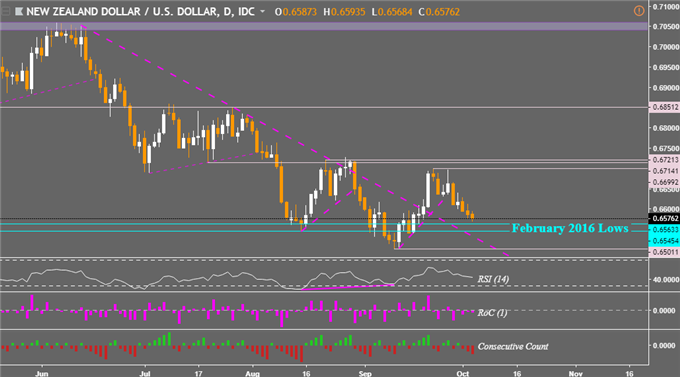