With just over a month until the re-imposition of sanctions on Iran’s energy sector, oil prices are trading at the highest level in over 4yrs with the price of Brent breaking above $85/bbl. Despite newswires showing that OPEC oil production in September rose over 90k, oil prices continued to surge amid reports that Iranian oil exports had dropped to a 2.5yr low at 1.72mln. Elsewhere, exports look set to continue its plunge with China’s top refiner, Sinopec, looking to halve its oil imports from Iran to around 130k bpd. Consequently, this suggests that China is bowing to pressure from the US to bring purchases down to zero despite previously stating that they would not stop buying Iranian oil.

Given that OPEC and Non-OPEC rebuffed President Trump’s demands to boost oil production in order to offset the loss of supply from Iran and Venezuela suggests that oil prices may continue to track higher. A touted tool to lower oil prices was for the US to tap into its emergency oil reserves in order to provide ample supply, however, the energy secretary had ruled this out due to the limited impact that this would have on reducing prices. Eyes will now be on proposals to allow the US to sue OPEC nations for manipulating oil prices (Senate subcommittee to take place on Wednesday. 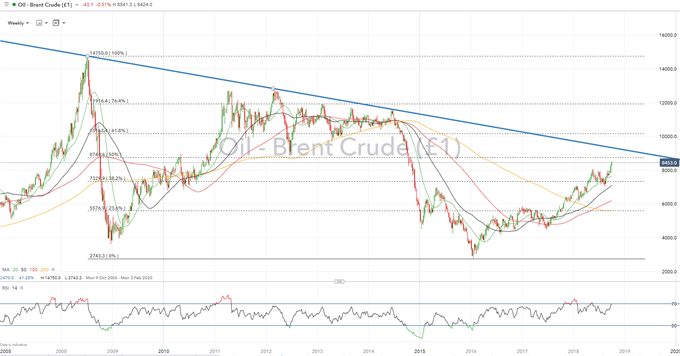 Bulls will be looking for a close above $85, which increases the potential for a move towards the 50% Fibonacci retracement at $87.46. If indeed this level is broken, this exposes the resistance in the form of the descending trendline from the all-time high. For now, momentum is with Brent crude bulls as concerns mount over oil supply.