USD Prices Eye Fed, Powell for Next Trend Move as Asia Stocks Up

On Wednesday, Asia Pacific markets traded cautiously higher after a mixed performance from Wall Street and gains in most European benchmark stock indexes on Tuesday. Heading into market close, the Nikkei 225 rose as much as 0.22%. More intense gains were seen in Chinese equities with the Shanghai Composite rallying more than 1.25%. Australia’s ASX 200 edged cautiously higher by about 0.10%.

Sign up for live webinar coverage of the RBNZ rate decision where we will be covering the New Zealand Dollar. The event begins at 20:45 GMT, 15 minutes before the announcement is released.

The Federal Reserve rate announcement followed by the press conference with Chair Jerome Powell takes the spotlight over the reminder of the day as top-tier economic event risks for FX and stocks. The markets are widely anticipating a hike with chances of a subsequent one in December hovering around 77% according to overnight index swaps.

With that in mind, there is more room for the Fed to disappoint hawkish bets which may trigger risk aversion. On the other hand, market pre-positioning for such a scenario could be unwound if the central bank does not. Either scenario may result in heightened US Dollar volatility. Meanwhile the British Pound remains exposed to stray Brexit headlines which have recently been supportive for GBP/USD.

Ahead of the Fed rate decision, the US Dollar continues to be in a downtrend since the middle of August which was initiated by a shooting star bearish reversal pattern. Near-term support is 93.71 or the July 9th low followed by 93.14. Immediate resistance on the other hand is a descending trend line from August. A push above it may resume the dominant uptrend from February to August. 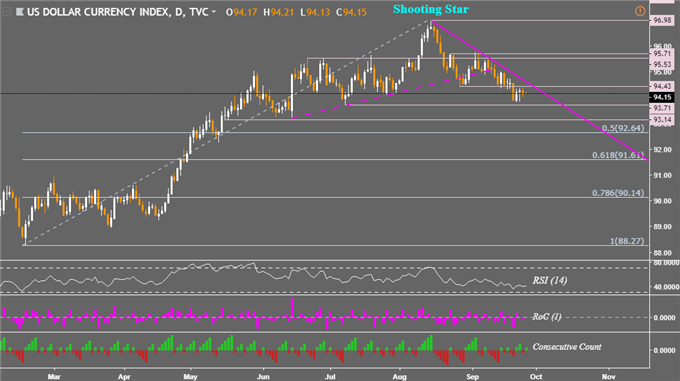