The Japanese Yen saw modest strengthening against the US Dollar only to weaken again as Governor of the Bank of Japan Haruhikou Kuroda stuck very much to the usual monetary script when he spoke to business leaders in Osaka.

Kuroda said that the BoJ’s pledge to keep interest rates very low for an extended period was ‘very important’ and, even though it does not mean that they will be kept low permanently, the central bank has no set time frame in mind for how long to stuck with easy policy. The Bank of Japan remains publicly committed to sticking with its ultra-accommodative stance until Consumer Price Index inflation hits 2%, something it shows no signs of doing anytime soon. For sure CPI is ticking up again, but it remains a very long way below where the BoJ wants to see it.

The BoJ maintains negative short interest rates, controls the Japanese yield curve and buys up bonds at a time when all other major central banks have reined in their own post-crisis stimulus. There are those who have speculated as to whether Japan might have to see tighter monetary policy before inflation hits that target, but it seems that Kuroda remains wedded to the status quo. USD/JPY initially slipped a bit as he spoke, before picking up again. Any prospect of higher Japanese rates seems very distant. 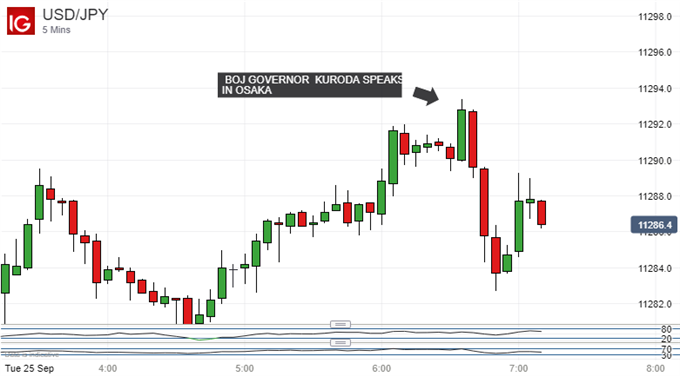 On its broader, daily chart, the Japanese Yen remain under clear pressure against the US Dollar, with USD/JPY within sight of the July peaks which are effectively its highs for the year. Trade war fears have given a haven bid to both the US Dollar and the Japanese Yen, but the Dollar seems to be winning the straight fight between the two. 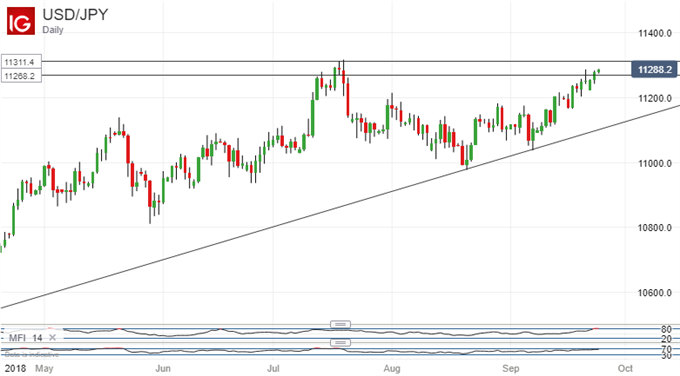 However, with those Japanese monetary taps wide open and those in the US still closing the Dollar enjoys significant interest-rate support, which the Yen entirely lacks.

USD/JPY remains clearly above a solid uptrend line on its daily chart and a retaking of those July highs looks all-but certain for as long as this is the case. The Federal Reserve is expected to raise interest rates once again this week. If the US central bank sounds less hawkish than the markets expected, the Dollar could take a knock. However, if it sticks to recent months’ script there would not appear to be much in the way of more USD/JPY upside.

Mr. Kuroda had nothing to say on this occasion about the trade tensions currently keeping markets in check. Much focus is of course on disagreements between the US and China, but Washington has its differences with Tokyo too.