Ahead of tomorrow’s Fed interest rate announcement, the US Dollar understandably traded mixed given the close proximity of what could be a volatile event. A currency that did manage to gain traction though was the British Pound which rose alongside the FTSE 100 during the European trading session. Much like yesterday, the catalyst that fueled this trading dynamic appeared to be the latest round of Brexit news.

After members of Theresa May’s own Conservative Party expressed their support for a final vote on a Brexit deal yesterday, the opposition Labour Party followed suit Tuesday. Their spokesman Keir Starmer said that they “will vote down a bad Brexit deal” and leave the table open to staying in the European Union in a second vote.

If enough support is gathered to strike down a potential ‘no deal’ Brexit that is delivered by Mrs. May, this could lead to a general election. Such an outcome may open the door for opposition leader Jeremy Corbyn to win power and bring up a second referendum on Brexit. From the eyes of the markets, signs that a ‘no deal’ is becoming more unlikely bodes well and vice versa.

Looking at global benchmark stocks indexes, the S&P 500 declined about 0.13% during US trade, lead lower by automakers. Losses started picking up before Wall Street opening bell after reports that BMW cut its outlook on profits. The company noted rising concerns on trade tensions. As a result, the anti-risk Japanese Yen and Swiss Franc lost ground to some of their major FX peers.

Keep an eye on the ANZ Business Confidence reading for September. Last time, it sent NZD/USD tumbling after it clocked in at its lowest since 2008. Then, there may be room for further New Zealand Dollar declines on tomorrow’s RBNZ rate decision which you may sign up for our live coverage of it.

GBP/USD prices are trying to recover from Friday’s Bearish Engulfing candlestick reversal pattern. Do keep a close eye on RSI though if prices should close above the September 20th close at 1.3270. Negative divergence there would signal fading upside momentum, further adding to the argument that the dominant downtrend from April to September might resume course. 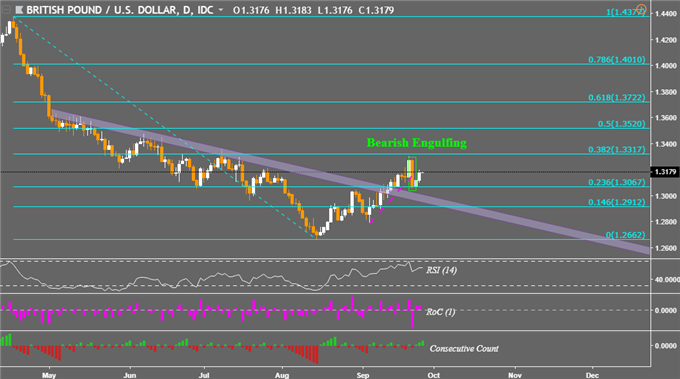 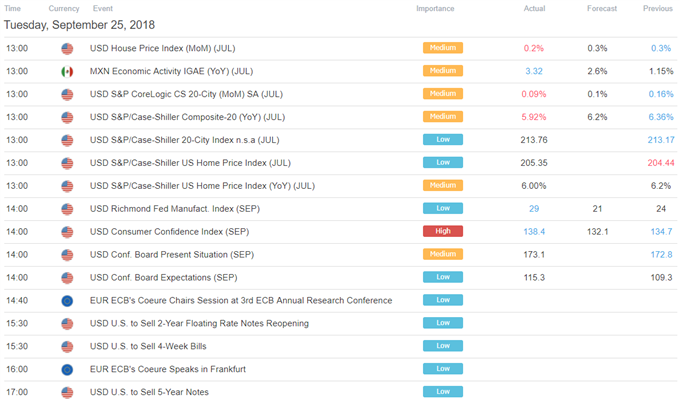