Asia Pacific stocks were more cheerful across the board on Friday, as they were always likely to be in a session which opened eager for the off given more record Wall Street highs the day before.

The trade tensions between the US and some of its biggest trading partners, most notably of course China, which have dogged the markets have not dissipated at all. However, for the moment, investors are content to focus on more positive stories, such as corporate earnings.

All major regional bourses were solidly in the green as their closes approached on Friday. The Nikkei 225 was up by 1% with Hong Kong and Shanghai sharing in gains of very similar size. The ASX 200 was up too, if by rather less. It was sporting a 0.2% gain in the late Sydney afternoon.

The US Dollar was a little weaker, as was the Japanese Yen, with investors apparently prepared to bet that trade woes’ impact on the global economy will ultimately be contained. The day’s economic numbers were sparse. The big one was official Japanese inflation data. The headline figure rose to seven-month highs but theunderlying price picture remains terribly subdued.

USD/JPY continues to gain, however, with the pair now tantalizingly close to July’s peaks, which were the highest point reached since the start of 2018. 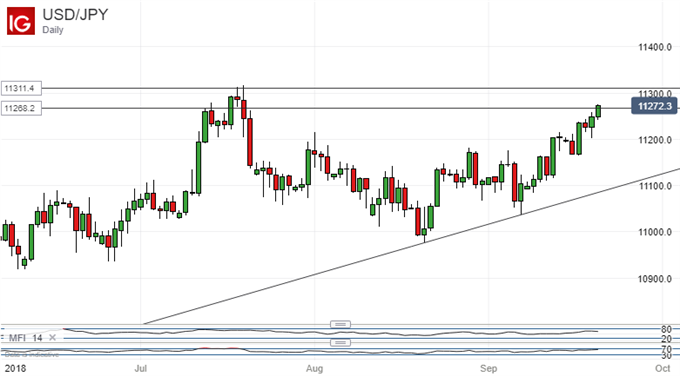 Next week’s US Federal Reserve monetary policy meeting should make the interest-rate differential split in the Dollar’s favor all the more pronounced.

Gold prices didn’t move much but the asset seems headed for its first rising week in the last four. Crude oil prices were steady but OPEC remained in focus after US President Donald Trump called for lower prices.

Still waiting investors on Friday’s economic data slate are various Purchasing Managers Indexes from around Europe and the US, with August’s Canadian inflation numbers also on the slate. UK public sector borrowing numbers are due too.