The New Zealand Dollar gained against its US counterpart as local economic data crossed the wires early into Thursday’s Asia Pacific trading session. Second quarter year-over-year GDP clocked in at 2.8%, up from economists’ forecasts of 2.5% and the prior 2.7%. The quarterly growth measure similarly exceeded expectations, at 1.0%, compared to the estimate of 0.8% and the previous 0.5%. Despite the upbeat GDP data helping the Kiwi’s recent rally, NZD/USD has remained in a downtrend channel since April of this year. Traders should wait for confirmation of upside momentum above the June 2018 resistance trend line, before considering next moves. 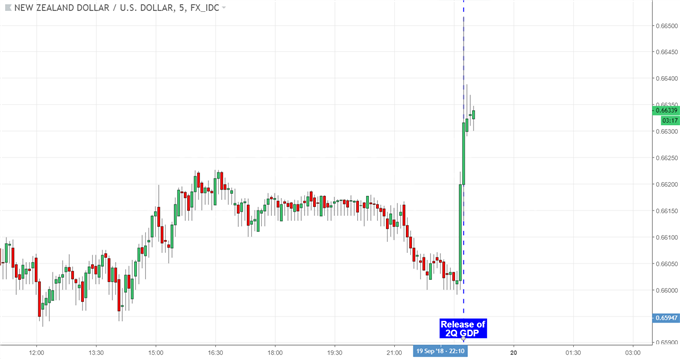 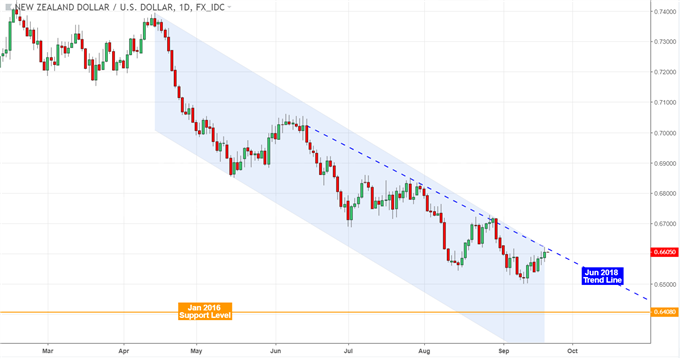 See our free guide to learn what are the long-term forces driving New Zealand Dollar prices!

The improvement in economic growth has cooled RBNZ rate cut bets, indeed front-end government bond yields rallied as the data crossed the wires. Governor Adrian Orr said last month that slowing GDP would lead to a decrease in the OCR. Overnight index swaps priced at a 23.1% probability of a cut by next February before the economic activity release, but decreased to 10.2% following the announcement. Thus, perhaps Mr. Orr would have less to fret about next week.

Looking ahead, the Kiwi Dollar may reverse its gains as the RBNZ is widely expected to maintain its 1.75% overnight cash rate at its September meeting next week. Furthermore, while the sentiment-linked unit also faces the release of credit card spending data and August’s trade balance, it will be closely eyeing market risk trends, specifically trade war developments. The Trump administration’s 10% tariffs on $200b of Chinese goods are set to take effect on September 24th; if these restrictions weaken emerging markets in the long run, the New Zealand Dollar may eventually follow suit.