Asia Pacific benchmark stock indexes traded rather mixed despite US President Donald Trump announcing $200b in Chinese tariffs due to take effect starting on September 24th. Looking at currencies also revealed a ‘risk on’ trading dynamic. What seemed to be keeping the mood somewhat upbeat were pronounced gains in Japanese equities.

The Nikkei 225, after being closed on Monday for a holiday, rallied more than 1.55 percent heading into Tuesday’s close. Almost all sectors led it higher with strong gains in particular from autos and consumer staples. On the daily chart, the Nikkei 225 gapped to the upside and was on its way to close at its highest since January.

Declines were seen in Chinese and Australian equities. The Shanghai Composite edged cautiously lower (-0.12%) while the ASX 200 dived about 0.40%. The anti-risk Japanese yen depreciated across the board while the higher-yielding Australian and New Zealand Dollars appreciated.

During Tuesday APAC trade, China’s Commerce Minister noted that cooperation is the ‘only right’ choice for the nation. This may have reduced expectations that the targeted nation would dial back retaliation threats, perhaps offering the markets some respite. Though Japanese shares had at that point already clocked in most of their gains.

Ahead, the Euro awaits a speech from ECB’s Governor Mario Draghi. But his tone may not deviate far off from a rather unsurprising monetary policy announcement last week. Rather, EUR/USD and sentiment may be adversely impacted by how emerging markets handle the US tariff updates. The MSCI Emerging Markets ETF is heading back down to the September lows, more declines could bolster the haven-linked US Dollar and send AUD/USD lower.

The Nikkei 225’s push higher has exposed the 78.6% Fibonacci extension at 23,587 which could be its next target after a close above the May high. Meanwhile, near-term support is the descending resistance line from May which is just above the 50% level at 22,814. 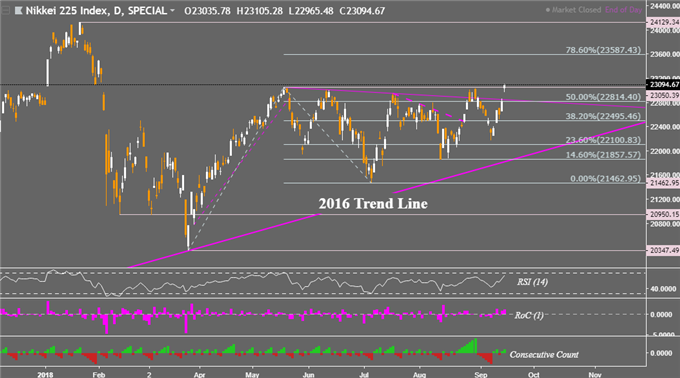