Ahead of Tuesday Asia Pacific trade, the markets were left eagerly awaiting an announcement from the US after Donald Trump said he would reveal an update on Chinese tariffs after Ney York market close. Here is what they got:

Mr. Trump directed USTR Robert Lighthizer to impose new China tariffs worth about $200b which will take effect on September 24th. The original tax on goods will be at 10% until the end of 2018. From then on, it will increase to 25%. The statement also added that retaliatory actions from China against US farmers or other industries would result in the pursuit of tariffs on about $267b of additional imports.

The immediate reaction from the markets was risk aversion. The anti-risk Japanese Yen appreciated across the board while the pro-risk Australian Dollar succumbed to selling pressure. S&P 500 futures are also pointing lower after the index suffered its largest decline in a day since August 15th.

In addition, the haven-linked US Dollar rose after underperforming with local government bond yields during the first half of yesterday’s trading session. Anti-fiat gold prices headed cautiously lower on the other hand.

After yesterday’s rather poor performance in most Asian shares, this trading dynamic could likely continue on Tuesday. As a result, we may see a pullback in the Nikkei 225 and the Shanghai Composite. This would amplify losses in the sentiment-linked Australian and New Zealand Dollars while supporting USD and JPY.

Attention now turns to the world’s second largest economy to see their reaction. Over the weekend, reports crossed the wires that China could skip trade negotiations with the US should the Trump administration pursue more tariffs. Not only is that now a possibility, but expect more retaliatory tariffs which could sour the markets even further.

If this kind of trading continues, we may see AUD/USD prices descend to test the current September low at 0.70852. Falling through this area would then expose the 2016 low at 0.68274. At the moment, prices are hovering around the December/May 2016 lows. Near-term resistance is the 38.2% Fibonacci retracement at 0.71985. 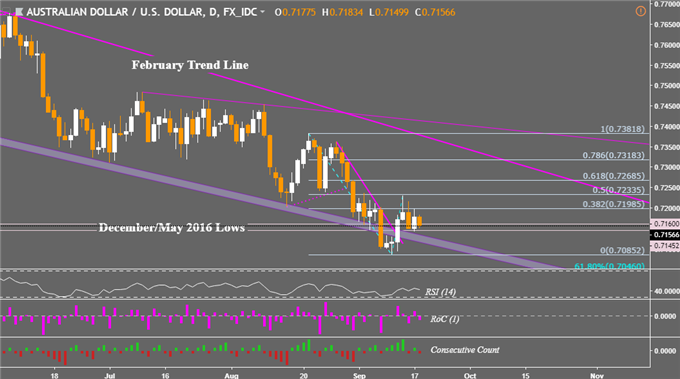