EUR/USD On Edge of Reversing Dominant Downtrend, USD/JPY May Rise

EUR/USD prices soared after worse-than-expected US CPI data temporarily lower Fed rate hike expectations. However, the US Dollar recovered in the immediate aftermath as local government bond yields pared losses. This insinuates that the outlook for Fed interest rates were essentially left unchanged by the end of the day.

The Euro did hold on to gains though and this may have been due to commentary from ECB’s President Mario Draghi. While he noted that protectionism and emerging market risks have gained prominence, he then added that Turkish and Argentinian spillovers have not been substantial. This may have cooled some worries about contagion back when the central bank noted concern about EU bank exposure to Turkey.

Anti-risk Japanese Yen prices suffered the most on Thursday, weakening alongside gains in stocks in APAC trade which then picked up after Wall Street open. The S&P 500 is now on its longest daily consecutive winning streak since August 29th at four days. Most gains were due to a gap, there was a pullback after Donald Trump tweeted that they aren’t under pressure to make a deal with China.

The MSCI Emerging Markets ETF also gapped to the upside and ended the day 1.31% higher after the Turkish central bank raised interest rates to 24% which helped the Lira appreciate. USD/TRY is now at its lowest since August 27th. The turnaround in the US Dollar also left the alternatively high-yielding currencies such as the Australian and New Zealand Dollars mostly little changed.

NZD/USD headed cautiously higher in early Friday trade after New Zealand Manufacturing PMI beat estimates. But gains may not last given that the RBNZ is not actively looking to raise interest rates in the near-term. With that in mind, the focus for markets will arguably be risk trends. USD/JPY may continue rising if Asia Pacific equities echo gains from Wall Street.

This may also bode well for the Australian Dollar, but it also faces Chinese industrial production and retail sales. The Aussie is seen as a liquid China market proxy due to Australia’s key trading relationship with it. Signs that Chinese manufacturing is losing momentum amidst the US tariffs and trade wars could send AUD/USD lower.

EUR/USD Technical Analysis – On the Edge of Reversing Dominant Downtrend

Gains in Euro prices have led EUR/USD at the edge of a range of descending resistance dating back to June. With that in mind, a lasting reversal of the dominant downtrend since April would need confirmation. That could be confirmed by achieving more closes above resistance, especially if 1.17447 is breached next. Getting above that would then expose 1.17908. 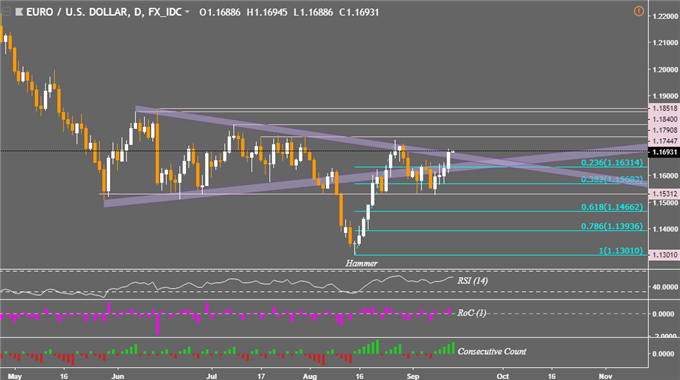 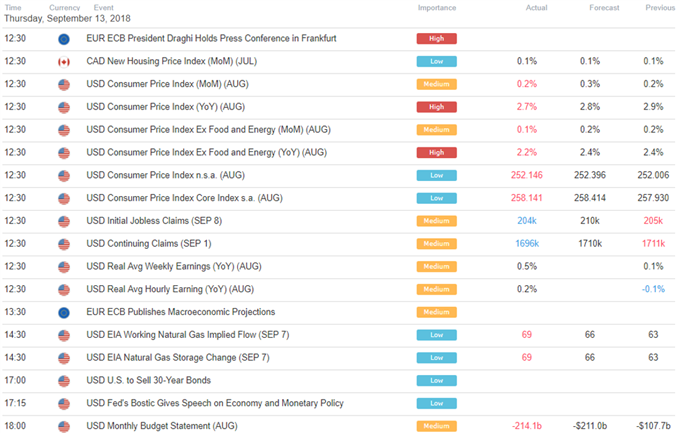 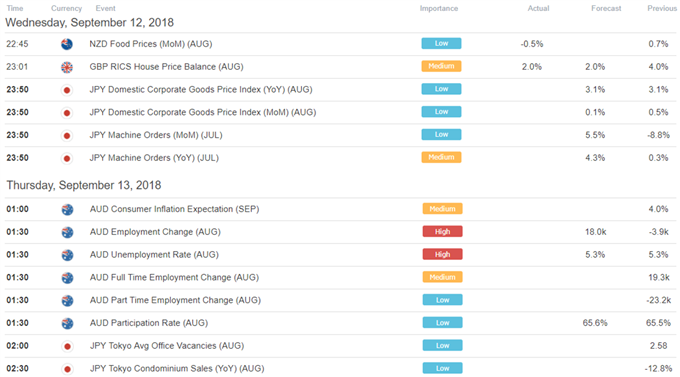