Most Asia Pacific benchmark stocks traded higher heading into Thursday’s close amidst hopes that the US would propose new rounds of trade talks with China. Last week, these indexes suffered as the Trump Administration threatened additional Chinese tariffs on most of their exports and then turned his attention towards Japan.

The Nikkei 225, which was up about 0.88%, is now heading for its best weekly performance since July. China’s Shanghai Composite edged cautiously higher, though most of its gains were pared after gapping to the upside. South Korea’s KOSPI rose more than 0.2 percent. One notable outlier was the ASX 200 which was led about 0.60% lower by financials.

Looking at currencies, the Australian Dollar appreciated against its major counterparts after a solid jobs report. However, lasting follow through for the Aussie based on RBA hawkish bets seems unlikely as the pro-risk currency focuses on developments pertaining to trade wars and emerging market contagion fears. The anti-risk Japanese Yen depreciated across the board.

Ahead, the markets are bracing for a slew of pertinent economic event risk. These are the ECB and BoE interest rate announcements. The former may have set itself up for a dovish announcement after reports crossed the wires yesterday that the ECB could lower their projections for economic growth. Meanwhile, the reaction in the British Pound on the Bank of England rate decision will depend on the margin of votes to keep rates unchanged. And then to top it all off, the US Dollar braces for August’s CPI report.

The head and shoulders bearish reversal pattern in EUR/USD appears to have failed to transpire amidst yesterday’s US Dollar weakness. The pair is now heading for its longest consecutive daily winning streak since August 29th. At the moment, prices remain just under a descending range of resistance from June. Simultaneously, they are supported by a rising channel from roughly the same time. Resumption of Euro weakness may see 1.1568 hold as support followed by 1.1531. 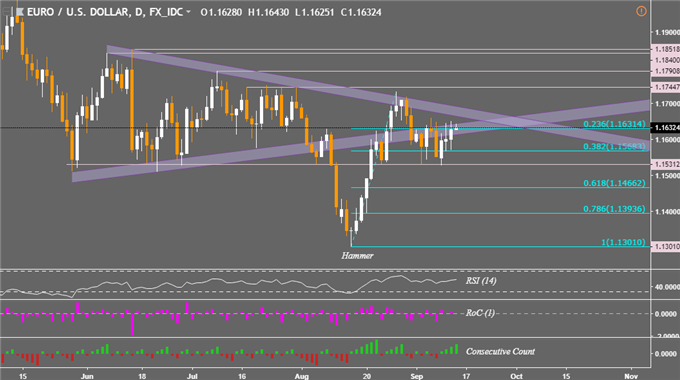