Find out what retail traders’ FX buy and sell decisions say about the coming price trend!

The US Dollar appreciated versus its FX majors, boosted by a strong jobs report where wage growth accelerated to its fastest since May 2009. US government bond yields rose, signaling firming Fed rate hike expectations. A similarly impressive employment report back in January arguably led to a collapse in the S&P 500 during the first couple of weeks in February as markets anticipated tightening credit conditions.

But the greenback’s appreciation was not done there. In the aftermath of critical event risk, Donald Trump announced that he is prepared to impose an additional $267b in Chinese tariffs on top of the already proposed $200b that could be implemented soon. Being the world’s reserve currency, the US Dollar then benefited from more gains as investors sought safety. As a result, the Euro depreciated against USD.

This also led to risk aversion as the S&P 500 ended the day 0.22% lower and marked its fourth day of consecutive losses. This was also its worst week since June. The NASDAQ Composite experienced its longest daily losing streak since April 24th as it fell the most in a week since March. Emerging Markets entered bear territory as the MSCI EM ETF Index fell over 20% from its January peak.

Pro-risk currencies like the Australian and New Zealand Dollars suffered. But looking at AUD/NZD, we still remain long after its decline was comparatively smaller when looking at AUD/USD and NZD/USD given its tendency to behave as a ‘risk neutral’ pair. Pro-risk FX such as the Japanese Yen and Swiss Franc struggled gaining as markets arguably favored the more liquid US Dollar.

Meanwhile the similarity sentiment-sensitive Canadian Dollar fared slightly better than its Australian and New Zealand counterparts. This was despite a disappointing Canadian jobs report where unemployment unexpectedly rose while hourly earnings softened. Perhaps prospects of Canada being part of the new NAFTA deal potentially next week offered some respite. The TSX rose after gapping to the downside.

Asia Pacific stocks could weaken on Monday, echoing trade war concerns that rattled Wall Street Friday. This could offer a chance for the Japanese Yen to pick up pace as it brushes off a GDP report. The Bank of Japan seems unlikely to alter its monetary policy course on the data. Meanwhile AUD/USD and NZD/USD could be left vulnerable to weakness. Do also note that Swedens went to the polls on Sunday and a result that shows the Eurosceptic Swedish Democrats gaining traction could sour market mood further.

Euro prices closed at their lowest since August 24th against the US Dollar. EUR/USD has also formed a head and shoulders bearish reversal pattern after the pair was unable to push through a descending range of resistance from June. Confirmation of the pattern is still needed via a close under the neckline around 1.15312. This could open the door to a reversal to the August low at 1.1301. 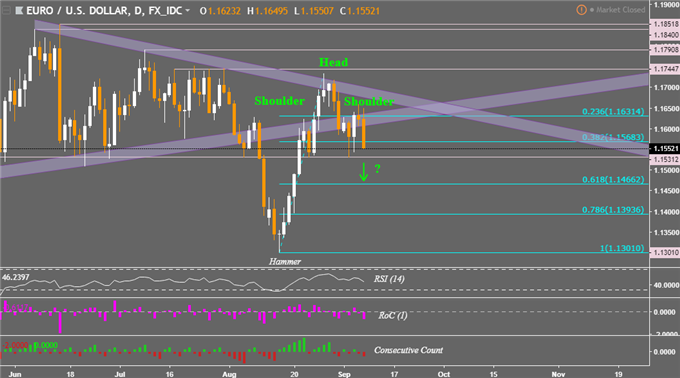 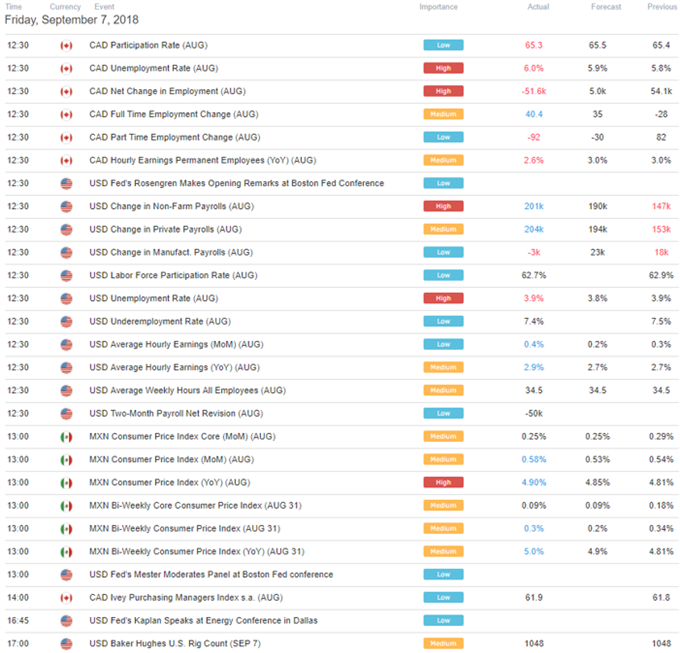 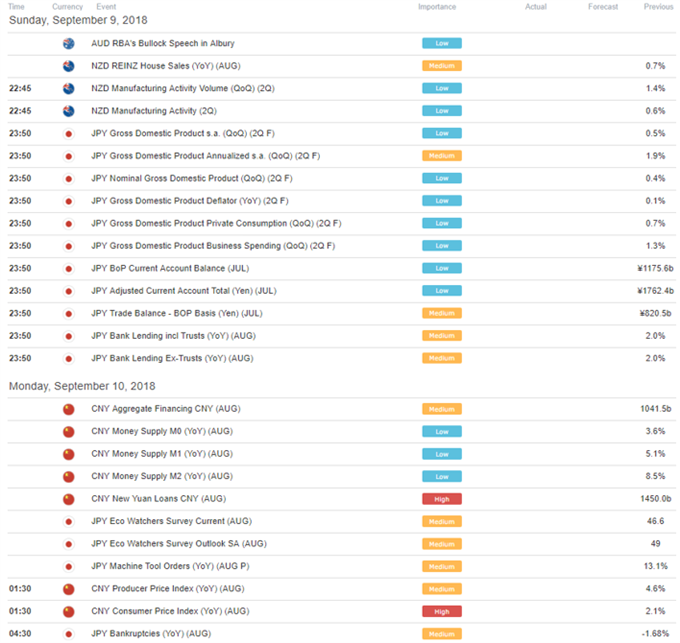