Of course China does not stand alone in the crosshairs of the White House. Donald Trump hinted Thursday to a columnist that Japan could be next in his administration’s baleful focus on countries which run persistent trade surpluses with the US, a report which saw the Nikkei under pressure.

It was down 1% in the middle of the Tokyo afternoon, with all other regional bourses also in the red. The ASX 200 lost 0.7% while the Shanghai Composite was down, but off its lows, to the tune of 0.13%.

The US Dollar slipped as the Japanese Yen appeared to clinch the battle of the havens. As well as fretting trade, markets are naturally looking ahead to August’s nonfarm payroll report which is coming up later. Those payrolls are expected to have risen by a quite chunky 195,000, with the jobless rate falling to 3.8%.

Technically speaking USD/JPY has now broken below the young, daily-chart uptrend channel which has been in place since late August. The US Dollar remains quite elevated against the Japanese currency by recent standards nevertheless, but more pressing weakness may be seen if the lows of May and June, in the 108.70 area, come back into play. 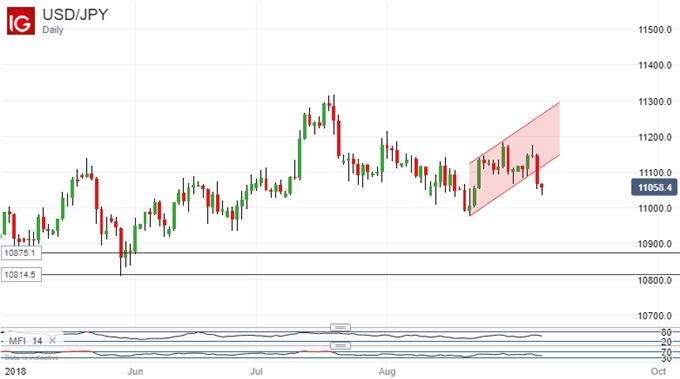 Gold made modest gains as risk appetite struggled. Crude oil prices were initially lower on news of another US inventory build, but they pared some losses through the Asian session.

Still to come on Friday’s economic data slate are German industrial production numbers, the Bank of England’s inflation forecast and Canadian employment figures. All of these will be mere warmup howevet to those US payroll figures.