Absent major economic news flow, most Asia Pacific benchmark stock indexes traded lower in anticipation of rising trade war fears. Donald Trump could impose additional $200b in US tariffs on Chinese products once the hearing period concludes on Thursday. Understandably, some of the more active equities and FX stemmed from Australia.

Not only is China its largest trading partner, but Australia also supplies the nation with key materials leaving itself vulnerable if those levies slow economic activity. The ASX 200 declined over one percent, led lower by materials and information technology. With that in mind, the pro-risk Australian Dollar depreciated across the board but losses were amplified by a further development.

After Westpac Banking Corp. (one of the nation’s largest banks) increased its mortgage rate last week, ANZ Bank announced today that it too shall raise variable home loan interest rates. For AUD, this bodes ill because higher lending rates potentially lowers the scope for the RBA to increase its own monetary policy setting tool. The central bank is already quite reluctant to raise rates any time soon as is.

With S&P 500 futures pointing lower ahead of the European and US trading sessions, we may continue seeing risk aversion which could amplify demand for the US Dollar. The greenback also eyes August’s ISM Services PMI release. If the outcome beats expectations, as we saw with the manufacturing survey earlier this week, then this could add fuel to DXY’s climb and vice versa.

The Canadian Dollar will look to a speech from BoC Senior Deputy Governor Carolyn Wilkins who wll talk about the recent interest rate announcement. USD/CAD rose on it, reflecting a central bank that failed to fuel hawkish monetary policy expectations. Overnight index swaps are not fully pricing in a BoC hike in October. This could open the door to CAD gains if Ms. Wilkins decides to cool doubts on that rate decision.

After the US Dollar made impressive progress against its Canadian counterpart, the uptrend in USD/CAD could be at risk. Zooming in on the four-hour chart reveals that upside momentum is fading via negative RSI divergence. This could lead to a reversal if not consolidation, but confirmation will be needed. For now, this warning sign should warrant caution.

We also had a break under a near-term rising trend line from late August as USD/CAD got stuck above near-term resistance between 1.3140 and 1.3176. A descent through it exposes January 2018 uptrend support. Meanwhile, uptrend resumption places the July 19th and 20th highs as range resistance next between 1.3265 and 1.3289. 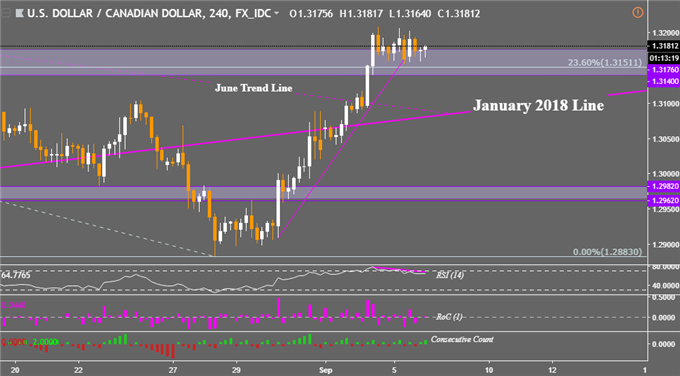