US Dollar, Stocks Down. Hawkish BoC to Boost USD/CAD as AUD Falls

In Japan, the Nikkei 225 headed about 0.44% lower as it tested its longest losing streak on the daily chart in a month. China’s Shanghai Composite Index fell almost one percent ahead of possible additional US tariffs on $200b of their goods. Meanwhile, the ASX 200 also headed aggressively lower. Australia’s benchmark stock index fell about 0.92% which was its worst performance since August 21st.

Speaking of Australia, its economy grew at its fastest pace in almost six years. This sent the Australian Dollar rising against its major counterparts as RBA rate hike bets swelled. This may have also explained why the ASX 200 fell, rising interest rates can bode ill for economic growth. Do keep in mind that the Reserve Bank of Australia still seems unlikely to raise benchmark lending rates in the near-term.

Another prominent economic event was Philippine inflation clocking in at 6.4% y/y in August. This was the fastest pace of price growth since 2009 and even surpassed the worst case scenario estimate from the Philippine central bank. This prompted Governor Nestor Espenilla to reassess CPI’s medium-term path. On the chart below, you can see the impact of a depreciating Philippine Peso on the country’s inflation rate. 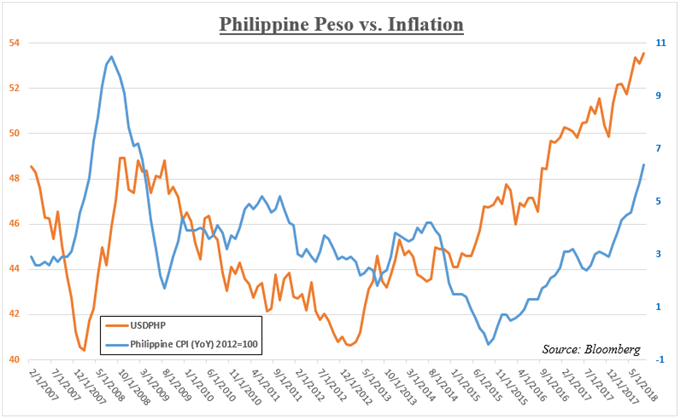 The deterioration in market mood boded ill for the pro-risk New Zealand Dollar. Another consecutive decline in NZD/USD would mean its longest losing streak since August 14th. Curiously, the anti-risk Japanese Yen remained pressure. The relatively strong Australian Dollar also kept the US Dollar weighed down.

Ahead, the Canadian Dollar will look to this month’s BoC rate decision which could offer bearish implications for the Australian and New Zealand Dollars. Overnight index swaps are pricing in an 82% chance that the central bank will raise rates next in October. If the Bank of Canada signals its intention to act soon, CAD’s rising yield advantage could send AUD/USD and NZD/USD lower.

The Canadian Dollar is on its longest winning streak against the US Dollar since May 25th after a false breakout under the January 2018 line. Upside gains in USD/CAD prices have led to a break above the near-term falling resistance line from June. A hawkish Bank of Canada could send the pair higher, near-term resistance is between 1.3265 and 1.3289 or the highs seen around the middle of July. 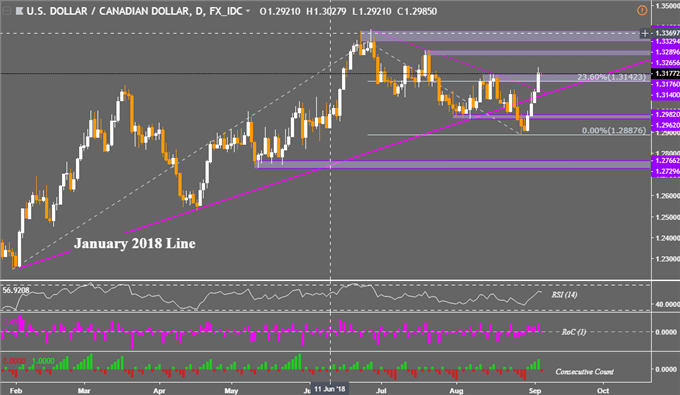