The Canadian dollar traded lower Wednesday after an underwhelming report from the Bank of Canada accompanied an unchanged overnight rate. Governor Stephen Poloz’s BoC was expected to leave rates at 1.50% after Wednesday’s meeting but the report seemingly disappointed investors.

While there was no material change on the rate, the case for continued rate hikes in the future was also not enough to spur confidence in the loonie. Leading up to the decision, a ‘no-change’ outcome was widely forecasted. In line with expectations, the central bank hiked rates at its last meeting on July 11th. The 25 basis point hike was the second hike of 2018. It may not be the last as Canada’s growth continues to outpace the intensifying tariff war with the United States. The next rate decision is scheduled for October 24th. At this time, the probability of a hike at October's meeting is roughly 80% but today’s rhetoric may influence expectations as economists sift through the report.

Tariffs a Point of Concern

In the full report, BoC officials noted inflation has remained near 2%. Officials also maintained the inflation level is consistent with an economy operating near capacity with moderate wage growth. Similar to the Federal Reserve, the Bank of Canada cited concern over tariffs but would not include them in their forecasts until they are implemented. At this time, the central bank found both business investment and exports have been growing steadily while wage growth is spurring consumption. Evidently, tariffs are a concern but the BoC remains data dependent.

The Decision Offered Little Reprieve for the Loonie

As we look to markets, the recent downtrend in the Canadian dollar extended following the announcement. After suffering days of decline versus the US dollar amid emerging market fear, NAFTA uncertainty, and strong US manufacturing data, the Bank of Canada was unable to offer a lifeline. At the time of this article, USD/CAD traded higher to roughly 1.3192. 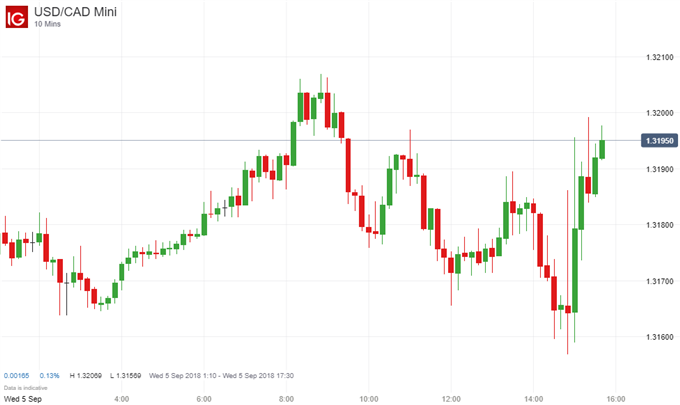 The EUR/CAD pair reflected a similar reaction, suggesting the loonie’s weakness is not isolated to a strong greenback. 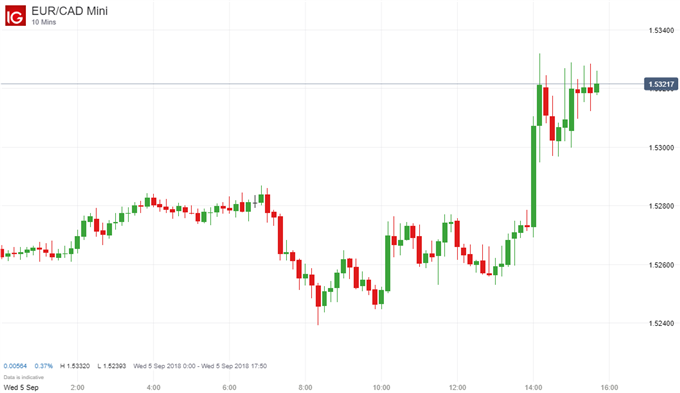 The loonie’s weakness may be set to continue with headwinds building for the North American nation. NAFTA uncertainty at the forefront, trade concerns continue to temper any optimism for the Canadian dollar. One short-term tailwind for the Canadian economy is rising crude prices. As hurricane Gordon threatens US production in the gulf, crude has pressed higher, bolstering Canadian exports.