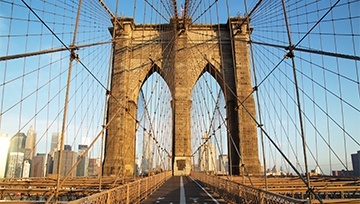 USD Rally Bolstered by Highest US ISM Manufacturing Figure Since 2004

Check out our Economic Calendar for other upcoming economic data and central bank events.

The Institute for Supply Management released manufacturing figures for August on Tuesday, providing fuel to drive the dollar higher. The report surpassed the expected and previous readings of 57.6 and 58.1 respectively. With a reading of 61.3, August’s manufacturing index marks the highest figure since May 2004 and the 112th month of consecutive growth for the United States economy. The increase supports the recent upwardly revised GDP figure and rising consumer confidence. The beat was not delivered by an outperformance of a specific sector but rather a broad increase across all industries.

Of the 18 manufacturing industries, 16 reported growth in August. Wood products and primary metals were the exceptions as ISM officials cited continued expanding business strength for the widespread growth. The new orders index remained above 60 for the 16th straight month and the inventories index remained low. Consumption approved despite shortages in labors and materials. Similarly, inputs expanded strongly despite steel and aluminum disruptions and continuing transportation difficulties. The broad outperformance and subsequent impact on the index, had a palpable effect on the dollar.

Early Tuesday morning, the dollar surged higher versus counterparts as the US economy shrugged off the turmoil afflicting many other markets. At the time of the report’s release, the dollar basket posted its largest rally of the day, culminating in a +0.56% rally to the 95.70 level. 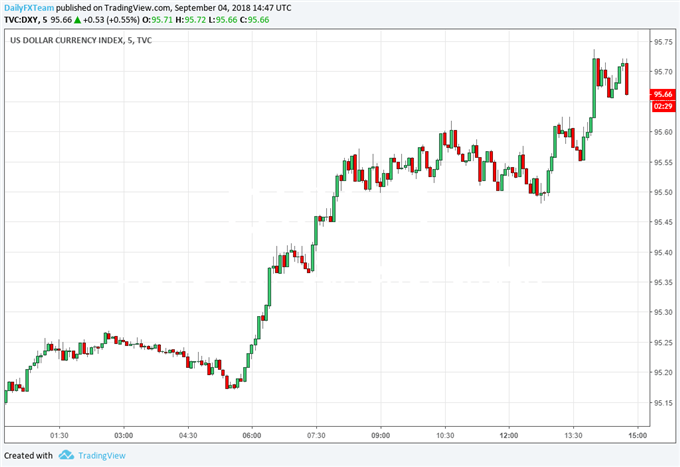 More specifically, EUR/USD fell lower as some headline concerns from August may have carried over. Emerging market fears still remain and contagion concern to European banks is still a notable risk. 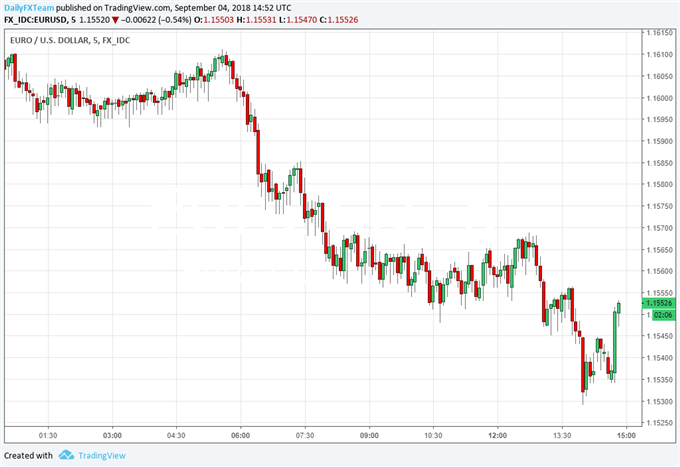 The decline in the euro matched the strength of the dollar basket, falling roughly -0.56% to 1.1552 in early hours. As the week progresses, the next data piece with market moving potential for the United States is the ISM Non-Manufacturing index, due Thursday. Until then, emerging market fears may well be a driving factor as South Africa officially enters a recession and the downtrend of the Turkish lira and Argentine peso is extended.