US Dollar prices were awoken and Wall Street came online from Monday’s holiday. The greenback appreciated as the S&P 500 declined. As liquidity remerged, US government bond yields rallied shortly after the Asia Pacific trading session. Traders may have been taking on hawkish Fed monetary policy bets ahead of this week’s nonfarm payrolls report.

Both European and US benchmark stock indexes traded lower as a result, prospects of tightening global credit conditions can deter investment. The Euro Stoxx 50 and FTSE 100 declined 1.05% and 0.62% respectively. Emerging markets, which have been coming under pressure lately (Turkish Lira and Argentina Peso depreciations), were also weighed down. The MSCI Emerging Markets Index ETF fell almost 2%.

Newswires generally attributed the weakness in the latter sector thanks to South Africa officially entering a recession. Though this development crossed the wires after the US Dollar secured most of its rally. Another victim of worries in emerging markets and risk aversion was the Indonesia Rupiah which weakened to a +20-year low as USD/IDR clocked in its longest rising streak on the daily chart in almost seven months.

The deterioration in market mood boded ill for pro-risk currencies such as the Australian Dollar. It gave up all of its gains from an earlier RBA rate decision where the central bank upgraded its views on inflation for 2019/20. The similarly-behaving New Zealand Dollar also declined, but NZD/USD was unable to breach the February 2016 lows.

Conversely, the anti-risk Japanese Yen fared better against most currencies excluding the US Dollar and British Pound. The latter was bolstered as Bank of England Governor Mark Carney hinted at staying as the Chief through Brexit negotiations.

The prominence of risk aversion during Tuesday’s trading session could echo into Wednesday’s APAC period, causing the Nikkei 225 to trade lower and bolstering Yen prices. Meanwhile, the Australian Dollar looks to a second quarter GDP report. Year-over-year growth is expected to rise to its highest since Q2 2016. A better-than-expected outcome could fuel temporary Aussie gains, but those may not last given a more hawkish Fed.

The DXY index is now on its longest daily winning streak since August 14th, or three weeks ago. The pullback in the US Dollar occurred after a false breakout under a rising trend line from June. Near-term resistance is between 95.53 and 95.71. A push above that exposes the August 15th high at 96.98. Meanwhile, a descent through the rising line places the August 28th low around 94.43 as support. 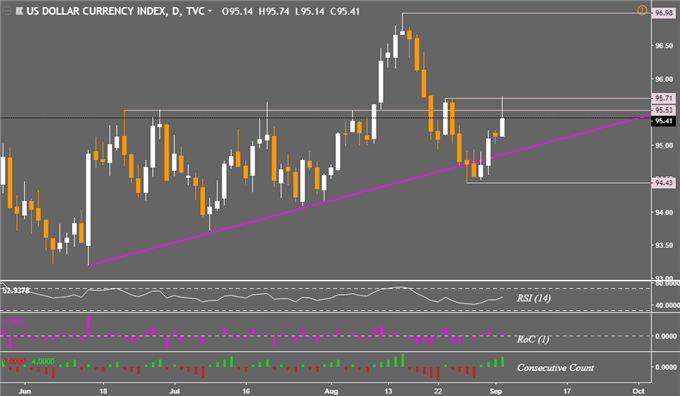