The US Dollar outperformed against its major counterparts on Friday amidst haven bids, with its appreciation picking up pace during the European trading session. There the DAX and Euro Stoxx 50 declined after market open, echoing weakness in Asia Pacific indexes. Broad Euro declines amidst worse-than-expected Eurozone CPI data also lifted the greenback as hawkish ECB monetary policy bets fell.

US stocks were on pace to end the day lower, but an update on NAFTA sent the S&P 500 rallying which caused it to close little changed. Despite a report that US-Canada trade talks stalled, Wall Street rejoiced the outcome as the NASDAQ Composite rose alongside the S&P 500. Canadian benchmark equities on the other hand fared worse as the TSX declined on the update.

This could have been the case due to the world’s largest economy essentially securing an agreement with its southern neighbor. US Trade Representative Robert Lighthizer noted that Trump will sign a deal with just Mexico, but only leaving the door open to Canada “if it is willing”. Negotiations between the United States and its northern neighbor are to resume on Wednesday.

Pro-risk currencies such as the Australian and New Zealand Dollars depreciated as market mood deteriorated throughout most of the day. AUD/USD suffered its largest daily decline in more than one week as it closed at its lowest point this year so far. But the pair could decline in the week ahead. Meanwhile the anti-risk currencies such as the Japanese Yen and Swiss Franc appreciated.

This week begins with a partial drain in liquidity as US markets are closed for the Labor Day holiday. As a result, stocks and currencies could be vulnerable to sudden changes in sentiment. This could come from trade war fears if China announces retaliation on threats of additional $200b in US tariffs. European markets could also be left vulnerable after Fitch lowered Italy’s rating outlook to negative from stable. This was a result of rising deficit concerns as economic nationalism threatens EUR/USD.

EUR/USD prices have closed under a near-term rising trend line that began with a bullish reversal pattern. The pair stopped its descent in a rising channel of support/resistance, but Euro weakness in the days ahead could see the pair drop to 1.1531 next. This area kept the pair afloat through June and July, it may reestablish itself as support. Meanwhile, a near-term resistance is above the August 28th high at 1.1744. 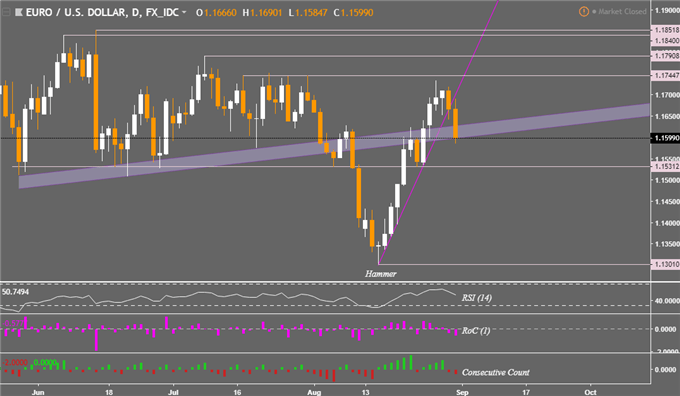 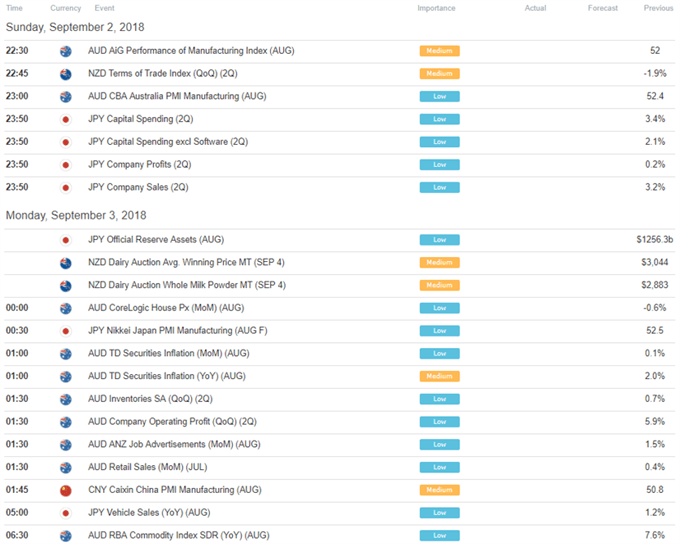