Market mood deteriorated considerably throughout Thursday’s trading session, sending stocks lower across the board. It arguably began in Asia Pacific markets where Donald Trump expressed his displeasure on North Korean denuclearization, blaming China for lack of progress on the matter. Increased trade war fears robbed the Nikkei 225 of most of its gains from a gap to the upside.

This risk aversion then echoed into European shares where the DAX gapped lower and fell as much as 1.28% in the following hours. Then, emerging markets further weighed on stocks as investors’ fears on Argentina depressed emerging markets. The Argentine Peso depreciated over 12% against the US Dollar as the MSCI Emerging Markets ETF (EEM) fell about 2.6%.

Argentina has recently requested the IMF to speed up disbursements of a $50b credit line as its currency depreciated. The country’s situation renewed funding pressure in emerging markets amidst the global tightening cycle. We saw similar fears arise when the US pressured Turkey with economic sanctions, causing the Turkish Lira to fall against the US Dollar along with the EEM and thus dragging down stocks.

Then, towards the end of the US trading session, Mr. Trump announced that he is ready to back an additional $200b in Chinese tariffs as early as next week. The S&P 500 finished the day 0.44% lower. Shortly after, the US President then announced that Europe’s offer for removing auto tariffs was ‘not good enough’. US Treasury yields tumbled as prices rose with the heightened demand for haven assets.

For the FX majors, this translated into broad gains for the anti-risk Japanese Yen. Meanwhile, the sentiment-linked currencies such as the Australian and New Zealand Dollars depreciated. Though declines in these were already amplified after worse-than-expected economic data during the Asia/Pacific session. The Canadian Dollar also took a hit, hindered by a rather mixed local GDP report.

Considering this, we may see the sour mood in markets reverberate into Friday’s Asia Pacific session as trade war fears and emerging market concerns dampen sentiment. As a result, JPY may find itself appreciating while AUD and NZD depreciate. Keep an eye on Australian private sector credit, if weakness in growth (as we saw with CAPEX data yesterday) lingers, Aussie Dollar may find additional downside momentum.

USD/JPY prices on the daily chart have declined to the 14.6% minor Fibonacci extension which is holding up as support. However, the pair remains caught on the falling trend line from August 2015 after failing to push above it multiple times. Continued gains in the Yen against the US Dollar may see USD/JPY descend to 109.77 which is the August 21st low. Meanwhile, near-term resistance is the 23.6% level at 111.80. 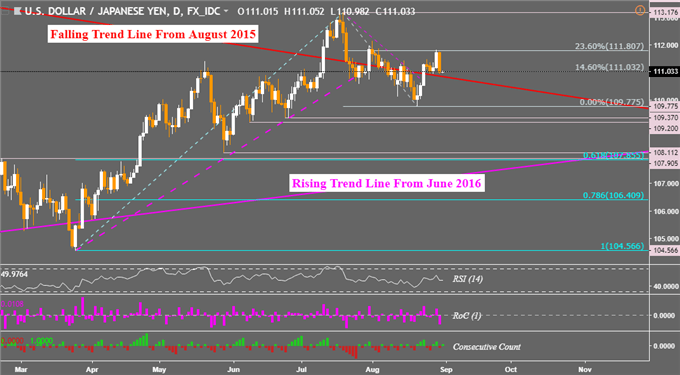 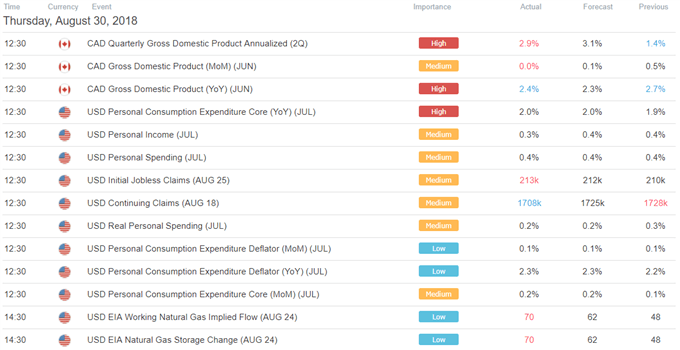 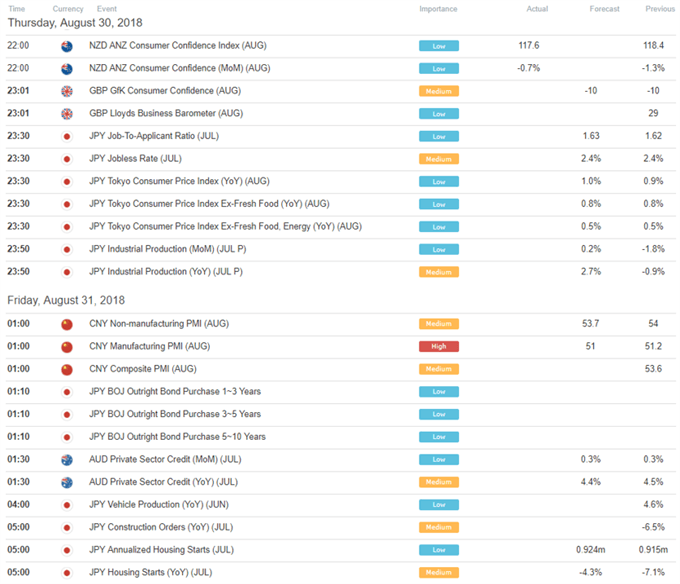