Its Australian counterpart also did not fare well. The Australian Dollar fell shortly after when local private capital expenditure clocked in at its lowest since a third quarter of 2016. This further diminished the urgency for the Reserve Bank of Australia to contemplate raising rates. In addition to the fundamentals, these sentiment-sensitive currencies were also weighed by mixed performance in APAC stocks.

While most benchmark indexes gapped higher as expected, they were unable to hang on to most of their gains. Japan’s Nikkei 225 pared them and traded only about 0.14% higher, the KOSPI was up only 0.04%. Fears about rising tensions between the US and China seemed to have dampened sentiment. US President Donald Trump expressed his displeasure and accused China of stalling his progress with North Korea on denuclearization.

Chinese equities headed aggressively lower, the Shanghai Composite dropped over 0.8%. As markets soured to a certain extent, the anti-risk Japanese Yen appreciated against its major counterparts. The British Pound also edged out cautious gains in the aftermath of Brexit developments.

Ahead, the Canadian Dollar (which has already been bolstered by progress on NAFTA talks) could find more upside momentum on June’s GDP report. Canada’s economy is anticipated to grow 2.3% y/y. Data out of the nation has been tending to outperform relative to economists’ expectations, opening the door to an upside surprise that can increase BoC rate hike bets.

On a daily chart, USD/CAD prices have clocked in their fourth consecutive losing streak which is their longest in about a month. The pair continues descending further and further away from the January 2018 rising trend line. Gains in the Canadian Dollar on the GDP report may see USD/CAD fall to the 50% Fibonacci retracement at 1.2818. Meanwhile, the 38.2% level seems to be holding up as immediate resistance. 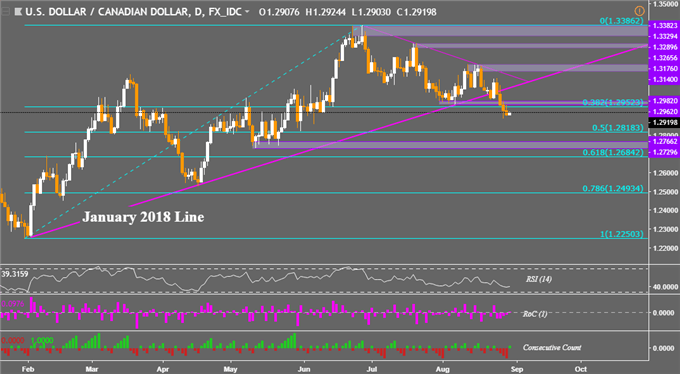