Oil prices are a nudge higher this morning, with Brent crude futures back above $76 a barrel, dismissing yesterday’s slightly bearish API report as focus turns to Iran. Reports from WSJ stated that Iran’s crude oil and condensate exports in August are set to drop below 70mln bpd for the first time since April 2017, ahead of the second round of US sanctions on November 4th. This consequently suggests that countries are indeed following the United States demands in regard to reducing Iranian oil imports. However, seasonal factors is also likely to have played a part in the drop in crude loadings, with August typically seeing fewer exports than any other month.

As markets edge closer to the November 4th deadline, the front end Brent curve contango has been decreasing, pushing the curve towards backwardation, which could see a further corrective move higher in the Brent benchmark. As such, this may see Brent back towards the high 70s as Iranian oil exports feel the bite from looming US sanctions. Alongside this, IEA Chief Birol noted that the oil market will likely tighten towards the year end due to strong demand and uncertainty over production in Venezuela and Iran.

Beware of US inventory data

Yesterday saw a slightly bearish API crude inventory report in which crude stockpiles rose 38k vs. expectations of a drop of 700k. As such, eyes for a short term move in oil will be on today’s DoE crude inventories, which may also show a build following yesterday’s API data. Expectations are for a drop of 690k. 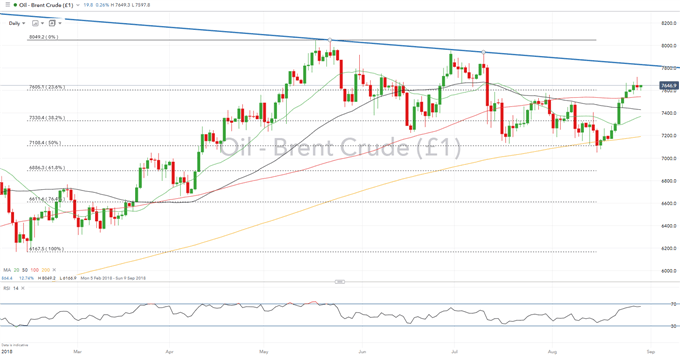 Recent changes in sentiment warn that the current Oil - US Crude price trend may soon reverse higher despite the fact traders remain net-long.