At a quick glance, Asia Pacific benchmark stock indexes appeared to trade higher during Tuesday’s session. This dynamic echoed gains from Wall Street where the US and Mexico reached a partial deal on NAFTA, leaving USD/CAD prices vulnerable to a reversal of its dominant uptrend. The Nikkei 225 traded about 0.41% higher while South Korea’s KOSPI rose 0.39%.

However, looking at currencies reveals a slightly different story. The sentiment-linked Australian and New Zealand Dollars traded cautiously lower. Meanwhile the US Dollargained. Sometimes the greenback can suffer when stocks trade higher, dwindling with ebbing demand for haven assets given its world reserve status.

Looking closely at the performance in APAC trade reveals that while most indexes gapped higher, they traded lower in the aftermath. This could also perhaps explain why the anti-risk Japanese Yen still weakened despite risk aversion. The Yen may have reacted with more vigor to the gaps in indexes then their behavior afterwards. The declines in equities were not enough to offset their gaps at the time of this writing.

Notable economic event risk was absent, leaving markets vulnerable to stray headlines that could dampen sentiment. The deterioration in market mood seemed to have stemmed from an update from the Hong Kong Monetary Authority (HKMA). It had bought about HK$6.72b to defend their currency peg, leaving the aggregate balance on course to decline to HK$84.2b on August 29th.

In the past, monetary tightening from the HKMA had inspired risk aversion as it fought to prevent USD/HKD from rising above the 7.85 weak-side convertibility undertaking. With this came the spending of the aggregate balance which has been falling from over HK$400b in 2015. Their efforts are likely to continue coming under pressure as the Fed tightens monetary policy ahead, leaving markets vulnerable to risk aversion.

With that in mind, we may see a deterioration in sentiment unfold ahead. S&P 500 futures have pared most of their gains throughout this session thus far. This may allow the US Dollar to keep rising. Do keep an eye out for updates on NAFTA, Canada’s Minister of Foreign Affairs Chrystia Freeland will be having talks with US officials later today on the matter. Signs that an accord between the US, Mexico and Canada will be reached soon could send stocks higher.

The decline in DXY on Monday was not enough for it to break under a rising trend line from June. If the US Dollar does continue rising ahead, we may see it test immediate resistance between 95.53 and 95.83. These consist of the highs set in the past couple of months as well as the 23.6% Fibonacci extension. On the other hand, a break under trend support exposes the July 26th low around 94.08. 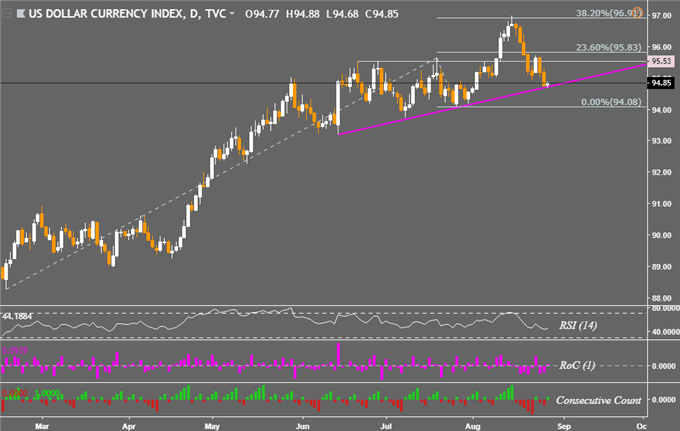