Canadian Dollar prices continued to appreciate against their US counterpart as expected. USD/CAD, which is on its longest consecutive losing streak since late July, is pushing further away from the January line that kept its uptrend afloat. Gains in CAD took off as European shares came online, reacting positively to developments on NAFTA talks between the US and Mexico.

The improvement in market mood during that session lifted the sentiment-linked Australian and New Zealand Dollars. While the Euro Stoxx 50 was supported by automakers, which rejoiced the progress in trade developments, jubilant investors were somewhat thrown off during the US trading session. There local consumer confidence jumped to its highest since October 2000 (just about 18 years ago).

US Dollar prices, which were depressed as demand for the haven reserve currency slumped during the European session, quickly rebounded alongside government bond yields. This signaled firming Fed rate hike expectations which bodes ill for credit growth and thus stocks. Canada’s TSX Composite Index fell 0.78% while the S&P 500 pared most of its gap to the upside and finished little changed (+0.03%).

During Wednesday’s Asia Pacific trading session, there will once again be a lull in key economic events which places risk trends as the key drivers for markets. In that case, the Nikkei 225 and ASX 200 could see some weakness as they react to prospects of tightening global credit conditions, sending the anti-risk Japanese Yen higher.

Beyond that, CAD could continue finding more upside momentum as Canada’s Minister of Foreign Affairs Chrystia Freeland proceeds with more talks on trade Wednesday. She noted that they are “encouraged” by US, Mexico progress.

DXY prices on the 4-hour chart have descended under the rising trend line that kept the US Dollar afloat since the middle of June. However, positive RSI divergence warns that downside momentum is fading fast and this may lead to a reversal or consolidation ahead. On the daily chart, US Dollar prices failed to close under the line. With that in mind, the pair may test resistance between 95.53 and 95.83 next. On the other hand, more declines has DXY facing the July 26th low at 94.08. 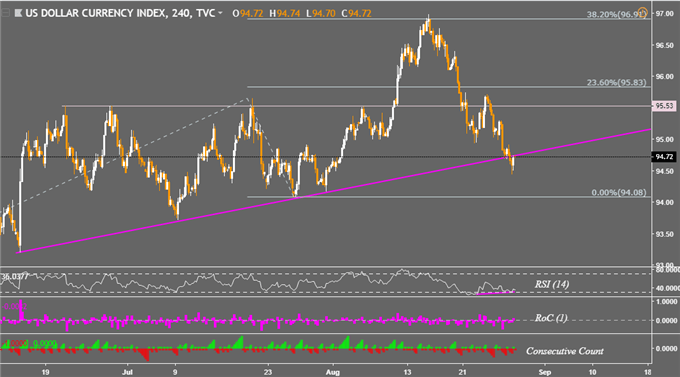 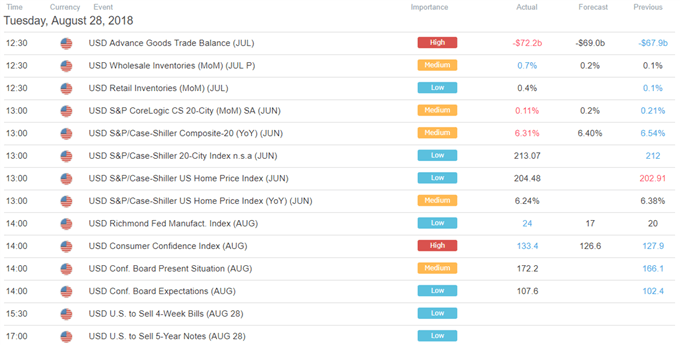