The Canadian Dollar outperformed against its major counterparts, bolstered during the US trading session as reports crossed the wires that Mexico reached a partial deal on NAFTA with its northern neighbor. Local government bond yields also soared, the two-year reached its highest since October 2008. With Canada left out of NAFTA talks while the other two reach an accord, they may soon be back at the table.

In the aftermath of the announcement, details from US President Donald Trump on the progress failed to offer more CAD gains. He noted that “we’ll see if Canada is separate or part of the Mexico deal”. White House Economic Adviser Larry Kudlow then said that they might resort to auto tariffs if Canada rejects the deal. This could lead to a situation where it would be difficult for Canada to reject the pact which potentially weakens their negotiating powers.

The combination in gains from the US Dollar’s major competitors (including the Euro as well) weighed against it. This was despite a rally in US government bond yields as investors perhaps sold local debt in favor of riskier assets such as equities. The bid/cover ratio in US 3M, 6M and 2Y bonds all weakened at auction today. Do keep in mind though that the dominant uptrend in DXY still holds.

Ahead, another quiet Asia/Pacific trading session could allow local benchmark indexes to echo gains from Wall Street. This could lead to the anti-risk Japanese Yen weakening against most of its major counterparts excluding the US Dollar perhaps. Meanwhile, the sentiment-sensitive AUD and NZD could receive more fuel to their upside momentum.

While the US Dollar uptrend still holds, USD/CAD has managed to close under both the January 2018 line and the range of lows set in early August. This could open the door for the pair to continue declining, reversing the dominant uptrend that kept it afloat for most of this year so far. Curiously, the pair was unable to break under the 38.2% Fibonacci retracement at 1.2952. A descent through it exposes the 50% midpoint at 1.2818. 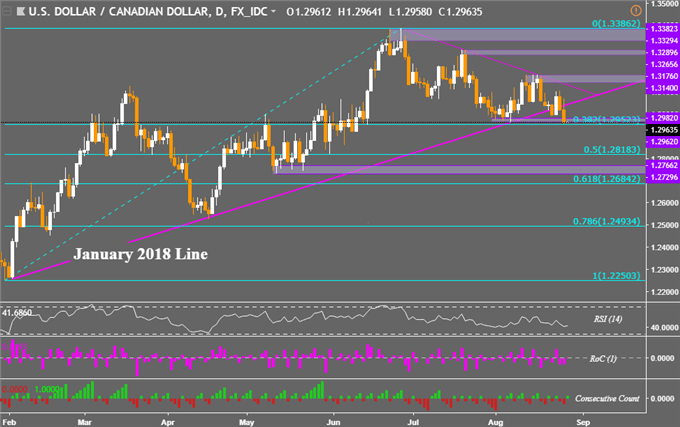