US National Activity Slips, Overshadowed by US and Mexico Trade Deal

Monday morning saw the Chicago Fed release a disappointing national activity index figure for July, but markets shrugged off the miss and climbed higher on the back of more immediate news. A breakthrough deal between the United States and Mexico regarding NAFTA has been reached, likely enabling Canada to rejoin the talks. US President Trump will hold a press conference at the White House concerning trade at 15:00 GMT. The conference should outline the deal in more detail and shed light on NAFTA negotiations moving forward.

The breakthrough comes amid ongoing trade wars and faltering economic data like Monday’s national activity and last week’s purchasing managers index. National activity came in at 0.13, missing the expected 0.45 and last month’s 0.48. A total of 34 indicators in the index improved while 51 declined. A value of 0 for the index coincides with the economy growing at its historical average. After July’s decline, the three-month moving average reads 0.05 from June’s 0.20. Further insight on the economy can be gained this week from Tuesday’s consumer confidence reading which has been in steady decline as of late. 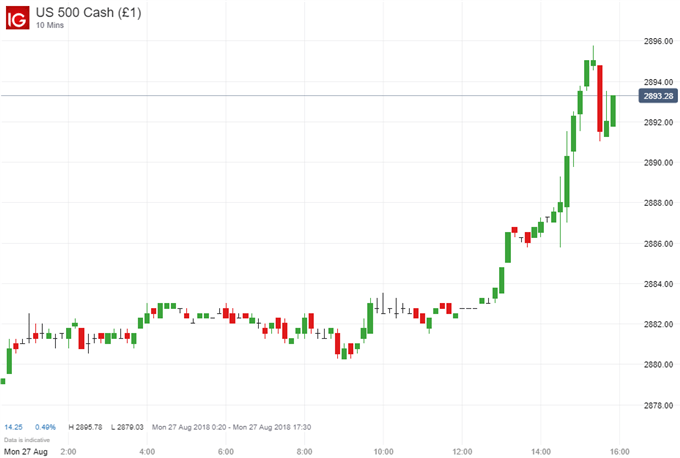 The US Resolves Trade War Fronts

Still, the declining confidence and activity of US consumers has not stemmed growth in equities. The S&P 500 pushed to new heights Monday, nearing 2900 in the morning hours. Similarly, confidence could rebound quickly should trade wars shrink in scope.

President Trump’s agreement with European Commission’s Jean-Claude Juncker seemingly paused one trade war front and Monday’s NAFTA breakthrough looks to offer significant progress on another. As uncertainties regarding trade abate, tariffs could be altered and extra costs facing manufacturers and consumers could be eliminated. Should they be eliminated, it would offer reprieve for some of the recently battered economic data.

However, it is too early to speak with certainty as the exact details of the trade agreement between the US and Mexico have not been released.