The DailyFX Third-Quarter Fundamental and Technical Forecasts are out now.

Asian markets were broadly higher as a new week kicked off on Monday, cheered by Friday’s record highs for both S&P and Nasdaq Stateside.

These came in turn as Federal Reserve Chair Jerome Powell was quite upbeat on US economic prospects but certainly no more hawkish on interest rates than markets were expecting.

Monday’s Asian economic news was patchy, but much softer than expected Chinese industrial profits didn’t dampen the equity market mood much, even though they added to mounting evidence that China’s economy is taking a hit, possibly exacerbated by Beijing’s trade spat with Washington.

The Nikkei 225 was up by 0.8% as its close approached, with all other main bourses well into green territory. Hong Kong’s Hang Seng led the way, adding more than 2%.

Such a broad revival in risk appetite saw the US Dollar wilt a little. China’s Yuan was on bullish form, its run higher continuing after Friday’s adjustment to the important ‘midpoint’ USD/CNY calculation from the People’s Bank of China. The Dollar wilted a little against the Japanese Yen, with USD/JPY’s latest rise appearing to run out of steam before it had scaled the previous significant peaks, made in early and mid August. 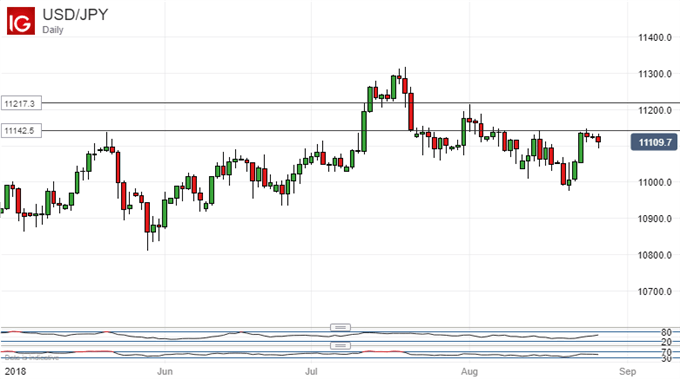 Crude oil prices were steady but with half an eye as usual on global trade tensions which kept the bias to the downside. Gold prices inched up as the Dollar weakened.

There’s not a lot on the international data calendar for the rest of Monday, but Germany’s Ifo business climate index will attract attention. The UK is out for a holiday, which will rob foreign exchange markets of much action.