The dollar pressed higher in early hours on Thursday, even after August’s reading for composite PMI contributed some downward pressure. The index slipped to 55, lower than last month’s 55.7 and is the fourth consecutive decline. Slowly receding from a high of 56.6 in May, the composite now rests near April levels. The manufacturing reading also slipped to 54.5, missing expectations of 55 and lower than July’s 55.3. Services PMI followed suit, falling to 55.2 from 56. Still, all three listings remain comfortably above the ‘no-change’ value of 50. However, consecutive declines suggest that tariffs are producing a more consistent and palpable pressure on businesses.

According to the report, slower business activity growth reflected the weakest rise in new order volumes since December 2017. Staffing levels increased at the softest pace for over a year as survey respondents noted a more cautious strategy and the need to reduce operating expenses. Private sector companies saw another sharp increase in input costs, despite no notable uptick in inflation. Members also reported higher costs for steel-intensive items and renewed pressure to increase wages for staff.

The upward pressure on input costs, particularly steel, is a direct consequence of the ongoing trade wars. The steel and aluminum tariffs have been in effect since May, when the composite index was highest for the year. Since then, the tariffs have had a tangible impact on PMI and should continue to do so.

To brush up on the current economic conflict, read A Brief History of Trade Wars.

In the services index, business activity posted another robust rise but measured the lowest so far in 2018. The survey found weaker growth in client spending contributed to a sustained fall in backlogs of work and service providers signaled the least marked rise in payroll numbers for eight months. Together, the survey reports outline some downward trends experienced in both the manufacturing and services industry.

After respondents reported multi-month lows for various categories, market participants may begin to wonder when the full impact of tariffs will be felt. As the US and China conduct low-level talks in Washington on Thursday, the potential to reduce the impact is present but low. Furthermore, the US will enact a further $16 billion in tariffs on China today with reciprocation to follow. After four consecutive months of decline, downward pressure on the index appears consistent.

Similarly, downward pressure on the dollar has been fairly consistent this week. Thursday’s data release coupled with Wednesday’s underwhelming Fed minutes provided little positive news but bulls seem poised to take control as support at the psychological level of 95 is tested. While bulls look for further opportunities to stem the recent downward drive, traders turn to the Jackson Hole symposium and Fed Chairman Powell’s speech to provide it. Should the dollar basket close higher Thursday, it would save the index from closing lower for six consecutive sessions. 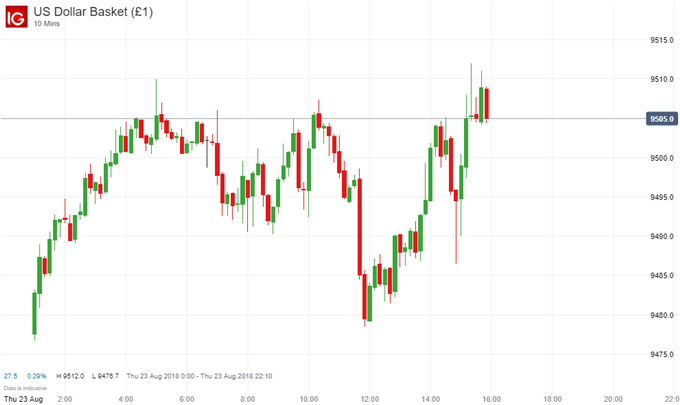