Market mood deteriorated throughout Thrusday’s trading session, sending most global benchmark stocks lower. This picked up pace towards the latter half of the day as the MSCI Emerging Markets ETF (EEM) suffered its largest drop in a single day since August 15th as expected. Worries of US imposing sanctions on South Africa may have contributed to the decline.

The S&P 500 fell about 0.17% after a couple of warning signs on the daily chart hinted that a reversal could be upon us in the near-term. Stock markets were also under pressure from prospects of tightening global credit conditions ahead of a speech from Fed Chair Jerome Powell at the Jackson Hole central banking symposium.

To that end, the US Dollar outperformed against its major peers as some traders sought safety in the global reserve currency. It rose alongside local government bond yields as well. Expectations of a second Fed rate hike by the end of this year grew. Gold prices declined as demand for the fiat-alternative commodity waned. Anti-risk currencies like the Swiss Franc and Japanese Yen rose.

The sentiment-linked Australian and New Zealand Dollars suffered, with the former declining more as political uncertainty weighed against the unit. Australia’s Prime Minister Malcolm Turnbull has been slowly losing grip on his leadership. Yesterday, the ASX 200 suffered as he announced that he would not stand as a candidate in a leadership ballot.

During the early hours of Friday’s Asia/Pacific session, we had some commentary from RBNZ’s Governor Adrian Orr and Canada’s Prime Minister Justin Trudeau. The former noted that the central bank is evenly balanced on the rate outlook while the latter said that he is encouraged by progress on NAFTA. The New Zealand and Canadian Dollars however showed little volatility on both of their speeches.

Ahead, we will get Japanese CPI statistics where headline inflation is expected to pick up to 1.0% y/y in July from 0.7% in June. But this data seems unlikely to materially alter the BoJ’s outlook on monetary policy. Rather, the anti-risk unit will probably focused on risk trends that may be influenced from political updates in Australia or trade war news.

After a temporary pullback in AUD/USD as expected, the pair clocked in its largest fall in a day in over two months. This brought the pair close to the current 2018 low at 0.72026 which is coincidentally closely aligned with the 38.2% Fibonacci extension. A break under support then exposes the December/May 2016 lows. Meanwhile, near-term resistance is the August 21st high around 0.73818. 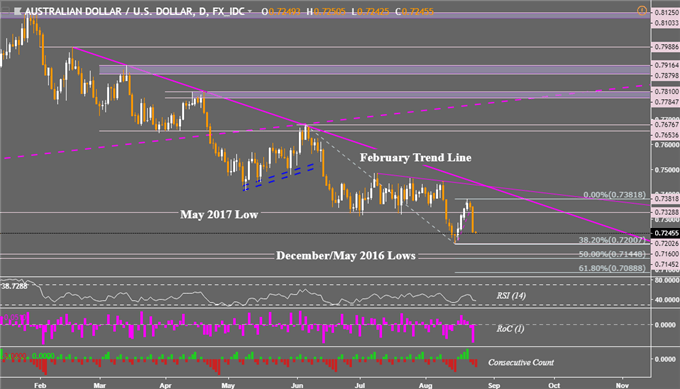 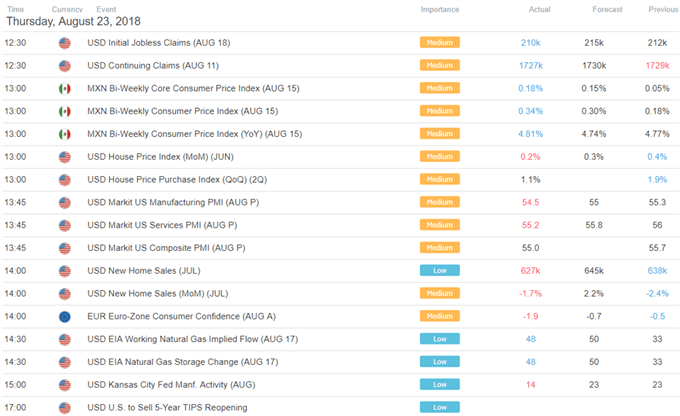