Political uncertainty continued depressing both the Australian Dollar and the ASX 200. Over the past few days, Prime Minister Malcolm Turnbull and his leadership have been coming under pressure. This was further amplified today when three more cabinet ministers resigned from his government. Mr. Turnbull noted that he would step aside in the event his rivals gather enough signatures to prove his lack of control.

China’s Shanghai Composite declined about 0.34% heading into Thursday’s close as the US imposed $16b in additional tariffs on them and they equivalently retaliated. In South Korea, the KOSPI also fell as sentiment deteriorated. However, reports that institutions sold around 49b in Korean Won of stocks led the benchmark index lower.

The Nikkei 225 on the other hand remained resilient, rising about a quarter of a percentage point. It was led higher by the consumer discretionary and information technology sectors. The general pullback in market mood lifted the anti-risk Japanese Yen. Meanwhile, the US Dollar edged higher. It often benefits from haven bids when stocks turn lower given its status as the world’s reserve currency.

Over the remainder of the day, keep an eye on emerging market stocks. Earlier this session, President Donald Trump asked Secretary of State Mike Pompeo “to closely monitor South African land and farm seizures and expropriations”. This raised worries the world’s largest economy could impose sanctions against the nation and USD/ZAR rose. Ahead, declines in the MSCI Emerging Markets ETF (EEM) could weigh against shares in the developed economies as a result. This may offer more room for Yen gains.

The EEM has just clocked in its longest daily consecutive winning streak since early March. The ETF stopped its latest ascent just under the August 10th high at 43.33 which may be acting as immediate resistance. In the event emerging markets sour over the next 24 hours, we may see it pullback and head down to near the June/July 2017 lows between 41.13 and 40.90. On the other hand, a push higher exposes the long-term descending trend line from January which is keeping the dominant downtrend intact. 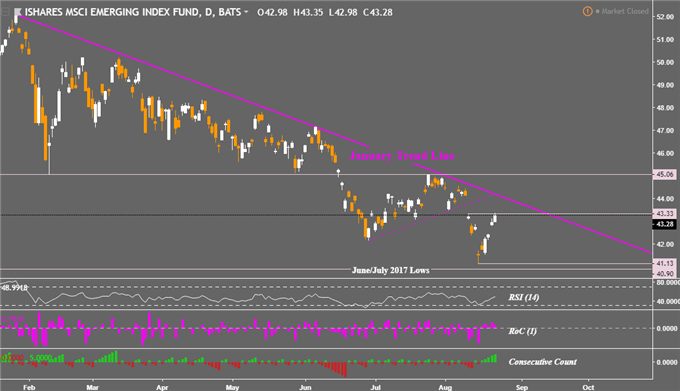